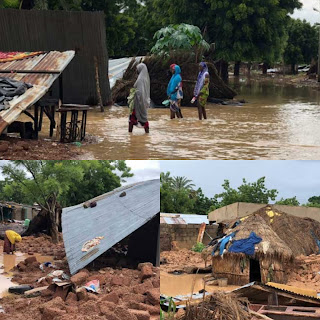 The death toll from the Jigawa floods has risen to 51, as residents continue to recover from the devastation caused by the disaster.

Sani Yusuf, Executive Secretary of the Jigawa State Emergency Management Agency, confirmed this to the Media on Tuesday.

He claims that approximately 2,051 people have been displaced in Karnaya village in Dutse, the state capital.

"The state government plans to relocate 404 mothers and their children totaling approximately 1,334 to the Warwade Internally Displaced Camp, while the 313 men will remain at the village's primary school until the flood subsides," Sani said.

He stated that the state government has forwarded a report to the federal government seeking assistance in disaster management.

"Because this problem is beyond our capabilities, we have forwarded a report to the federal government. We require serious intervention. As I speak to you, more towns are being flooded, and several bridges have completely collapsed. Drivers should exercise extreme caution while driving," he added.