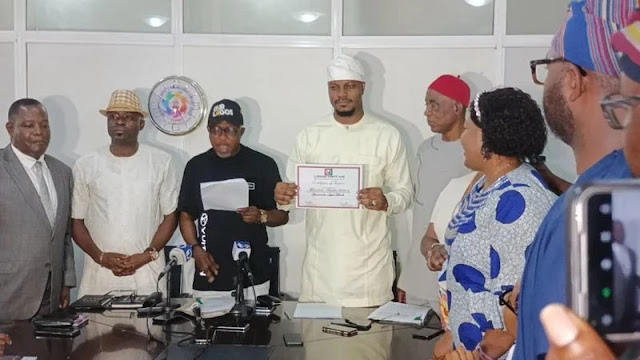 At a press conference in Ikeja yesterday, the Labour Party's National Working Committee (NWC), as represented by Mr. Abayomi Arabambi, the party's national publicity secretary, presented a certificate of return to Gbadebo Rhodes-Vivour, the party's candidate for governor in Lagos State. The NWC also inaugurated the state's executive committee, which is headed by Comrade Olukayode Sarako.
Speaking to reporters, Arabambi explained that Awamarid is merely a stand-in, which is why the recent substitution primaries were necessary and produced Rhodes-Vivour as the party's gubernatorial candidate.
In addition to emphasising that the party has zero tolerance for "unscrupulous and dubious politics that Awamaridi is reportedly demonstrating," he said that the party had filed the proper paperwork with the Independent National Electoral Commission (INEC) regarding the new candidate.
The NWC member said: “For a candidate for election to emerge in a political party, it has to go through a constitutional process.

“The emergence of Gbadebo Rhodes-Vivour as the 2023 Lagos State Governorship Candidate followed all the necessary laws, regulations and guidelines as provided in the LP Constitution, the Constitution of the Federal Republic of Nigeria and the INEC guidelines.

Arabambi added, “LP officially re-affirms with all authority that the winner of the substitution primary election on the platform of our party as the governorship candidate in 2023 in Lagos State is Gbadebo Rhodes-Vivour

“Simply to put the records straight, Awamaridi was the chairman of the LP of the Lagos State Caretaker Committee at one point.

“He was made a placeholder for the Governorship Primary Election, thus his name was submitted as the Governorship Candidate since Lagos LP was yet to finally conclude all the required processes.

He added, “The placeholder status given to Ifagbemi Awamaridi was one from which he formally tendered official resignation.

“Awamaridi’s resignation letter was willfully, voluntarily and clearly signed and tendered. Of course, Documents don’t lie. He has ceased to be our gubernatorial candidate.”


He called on Awamaridi to stop parading himself as the chairman and governorship candidate of the party in the state, pointing out that he could seek redress in court if he felt cheated.

He also re-affirmed the candidacy of other winners into various elective offices on the platform of the Labour Party, marinating that Awamaridi’s tenure has also expired as the chairman of the caretaker committee, stressing that the press conference should put to rest all controversies.

“On no account should anybody parade himself as the gubernatorial candidate of the Labour Party and chairman,” he added.

On the issue of structure, Arabambi said that LP had garnered 22 million supporters across the length and breadth of the country and that the number will increase to 50 million soon, pointing out that the party is prepared to win elections and provide exemplary leadership for Nigerians.

In his response, Rhodes-Vivour commended the party for clearing all doubt and controversies about his candidacy after winning in one of the freest primaries.

“I am happy that we can now move forward. Lagos we have now as the state that is not working. It is time for Lagos to work for everybody.

“The people will get the best service. We are going to put the people first. We are determined to deliver the state that works,: he said.

On the issue of Awamaridi’s name still on the INEC list, Arabambi said, “For those of us familiar with INEC guidelines we have time lag for primaries.

The governorship and House Assembly candidates’ names will be published in October and by the time that list comes out, Awamaridi’s name won’t be there. We know the INEC guidelines.”
Chima Ugo is a patriotic Nigerian, a journalist, blogger and singer who is so much interested in the internet, journalism, and blogging and have been for half a decade.