Liz Truss favourite to be next Britain premier 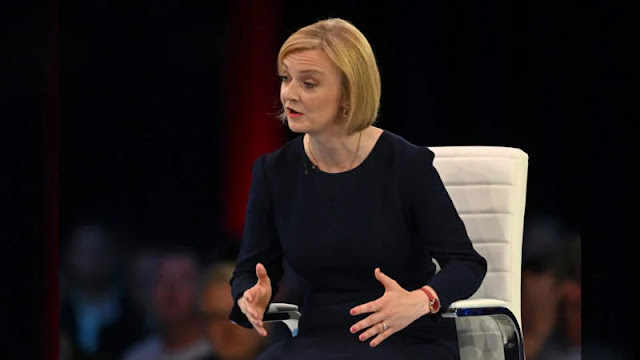 Utilizing her political expertise to edge off rival Rishi Sunak, Liz Truss has emerged as the overwhelming favourite to succeed Boris Johnson as leader of the ruling Conservative party and UK prime minister.
After resigning in protest of a number of government misdeeds, Sunak assisted in igniting the contest by inspiring others to do the same and Johnson to do so.
However, while being seen as a stronger public speaker, he has drawn criticism for sticking to fiscal orthodoxy to address the economic crisis and being constrained by his reputation as a wealthy technocrat.
Sunak, who would go on to become the first prime minister of colour in Britain, has additionally been accused of betraying the Tories by bringing down Brexit hero Johnson.
Truss meanwhile has doggedly hammered home a direct and consistent message, promising massive tax cuts, and has shied away from criticising Johnson.

“She’s a better politician,” said John Curtice, a political scientist at the University of Strathclyde in Glasgow.

“If you ask me what Liz Truss’s campaign was about I will immediately say to you: ‘a tax cut not a handout’. Very clear,” he told AFP.

“There is no strapline for Sunak, nothing.”

For Curtice, Truss has effectively conveyed “traditional Conservative messages” to Tory members while Sunak has been more nuanced.

“It’s also a bit of a lecture,” he said, assessing that he has come across as “a wee bit brittle” under pressure.

“You can see that she’s been in the game for longer,” he added.

Truss, 47, has described her ascent towards the top of British politics as a “journey” that has seen her criticised for being ambitiously opportunistic.

She comes from a left-wing family and initially joined the centrist Liberal Democrats before jumping ship to the right-wing Conservatives.

She became MP for the South West Norfolk constituency in eastern England in 2010, surviving revelations of an affair that almost cost her the nomination.

Since 2012 she has held a series of ministerial posts in the education, finance, and departments as well as a difficult spell in justice.

In 2016, she campaigned for the UK to remain in the European Union but quickly became one of its strongest supporters when Britons voted for Brexit.

When the UK left the EU, Johnson put her in charge of negotiating new free trade deals before appointing her as foreign secretary last year.

In the role, she took on the controversial task of trying to overhaul differences with Brussels about post-Brexit trade in Northern Ireland.

Like Johnson, she has talked tough on Russia and given unswerving backing for Ukraine.

Truss’s dress sense and photo opportunities — posing in a tank in Estonia and wearing a fur hat in Moscow — have earned her comparisons to Tory icon Margaret Thatcher.

Her sometimes stiff style has become visibly more relaxed and allies have sought to soften her image, revealing her love of karaoke and socialising.

“For a party that’s gone in quite a populist direction in recent years, she’s been able to present herself as more authentic, more ordinary than Rishi Sunak, who is all too easily presented as part of the global elite,” said Tim Bale, from the Queen Mary University of London.

“Like Boris Johnson, she is keen on the idea that there is some kind of elite that has to be countered and she sets herself up as being outside the establishment, despite having been in government for eight years.”

Sunak, 42, the grandson of Indian immigrants, grew up as the son of a doctor and a pharmacist in Southampton, on England’s south coast.

Truss, who went to a state school in Leeds, northern England, also studied at Oxford. Both studied politics, philosophy, and economics.

Sunak met his wife, Akshata Murty, whose father founded the Indian tech giant Infosys, at US university Stanford before jobs at Goldman Sachs and investment funds.

He has represented the constituency of Richmond in northern England since 2015, where he was soon marked out as a potential future prime minister.

He became finance minister in early 2020, quickly winning plaudits for spearheading government support for people and businesses affected by the coronavirus pandemic.

But Sunak, a self-confessed geek with a love of Star Wars, saw opinion turn against him this year after it emerged that his wife did not pay UK tax.

Critics have also used his private wealth, expensive clothes, and houses to portray him as out of touch with the ordinary public.
Chima Ugo is a patriotic Nigerian, a journalist, blogger and singer who is so much interested in the internet, journalism, and blogging and have been for half a decade.