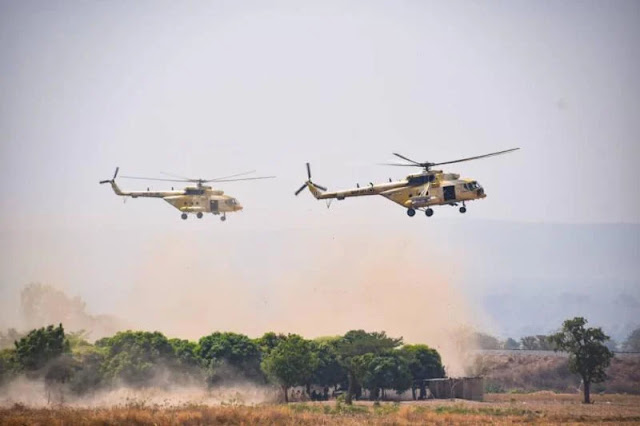 The Nigerian military has maintained its offensive against terrorists in the North East, attacking ISWAP leader Fiya Ba Yuram's enclave in Sambisa forest, Borno State, over the weekend.
Last year, Fiya Ba Yuram took over as chief of the ISWAP militant group.
According to PR Nigeria, the operation on Fiya Ba Yuram's enclave was carried out in response to credible and actionable intelligence provided by the Air Component of Operation Hadin Kai indicating terrorists were assembling for an unspecified purpose.
Following the intelligence, air strikes were authorised and carried out on the location.
He said: “An assessment of the location after the strikes revealed it to be successful, though it remained unconfirmed if Fiya Ba Yuram was among the terrorists neutralised in the strikes.”

Meanwhile, similar air strikes were also undertaken in the Tunbuns near Lake Chad, after suspected terrorists’ activities were observed in the area, believed to be a training camp for ISWAP fighters, PRNigeria said, quoting another military intelligence officer.

“The targets were subsequently acquired and engulfed in flames all after. The aftermath of the airstrike revealed that pandemonium broke out as the remnant of surviving terrorists took cover under nearby trees which were later struck by the aircraft”, the officer disclosed.

“Yes, strikes were carried out on some specific targets in the Tunbuns and Sambisa with varying degrees of successes recorded. The NAF won’t, however, be drawn into the details of those neutralised”, he said.
Chima Ugo is a patriotic Nigerian, a journalist, blogger and singer who is so much interested in the internet, journalism, and blogging and have been for half a decade.