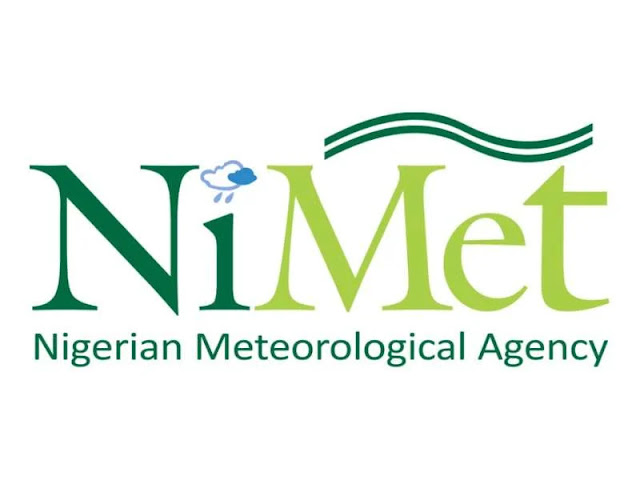 Residents of Kaduna, Niger, Bauchi, Plateau, the Federal Capital Territory, and Nasarawa have been advised by the Nigerian Metrological Agency (NiMet) to prepare for severe rain between Tuesday, August 30th, 2022, and Thursday, September 1st, 2022.
A moderate to heavy downpour is predicted for states including Ogun, Kwara, and Oyo, according to an impact-based weather forecast released on Monday by the agency.
The report also stated that high winds are anticipated to accompany moderate to heavy rainfall, especially across the Northern and Central states, and that there is a danger of flash flooding of roads, low-lying communities, and river channels.
The forecast reads, “During the forecast period (the next 96hours), heavy rainfall is expected over parts of Kaduna, Niger, Bauchi, Plateau, the FCT and Nasarawa State on Thursday, 1st September, 2022.

“However, Low to moderate rainfall is expected over places in states such as Yobe, Borno, among others while light or no rains are expected over the rest of the country.

The agency, also warned Nigerians against standing under trees, unsecured structure, as well as, switch off electrical appliances during rain fall

He said, “the public is advised to avoid low-lying terrains, not to drive through running water, clear water ways of debris, avoid standing under trees and unsec ured structures during the rain, switch off electrical appliances

“As a result of the heavy rains expected over parts of central cities and the moderate rainfall expected over the southeastern parts of the country for two consecutive days, there are chances of flash flooding of roads, lowlying settlements and river channels.”

“Also, the moderate and heavy rainfall events are expected to be accompanied by strong winds especially over the northern and central states during the forecast period.”

“The public is advised to avoid low-lying terrains, not to drive through running water, clear water ways of debris, avoid standing under trees and unsecured structures during the rain.

“Also, switch off electrical appliances before the rains and not during the rain to avoid electric shock, and be prepared for this event to avoid damages from weather-related hazards and watch out for updates,” it reads.
Chima Ugo is a patriotic Nigerian, a journalist, blogger and singer who is so much interested in the internet, journalism, and blogging and have been for half a decade.