Olusegun Obasanjo: What I told Bola Tinubu when he visited me 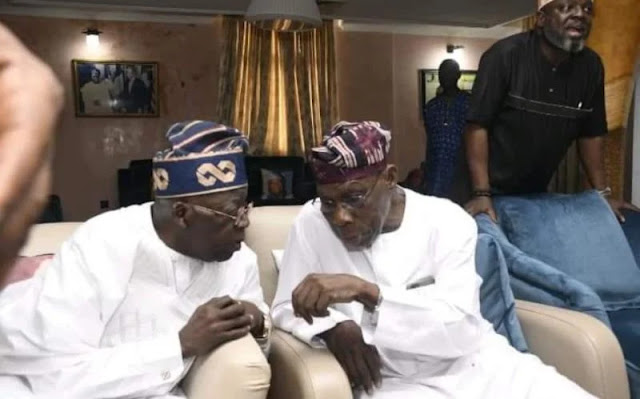 Former President Olusegun Obasanjo visited Asiwaju Bola Ahmed Tinubu at his home in Abeokuta on Wednesday and shared one of the jokes he had written with the APC candidate for president.
As may be remembered, Tinubu paid a visit to the former president on Wednesday at his Penthouse, which is situated on the grounds of the Olusegun Obasanjo Presidential Library in Oke Mosan, Abeokuta.
Two former governors of the state, Chief Olusegun Osoba and Otunba Gbenga Daniel, Femi Otedola, a millionaire businessman, Chief Bisi Akande, a former temporary national chairman of the APC, and Femi Gbajabiamila, speaker of the House of Representatives, were among those that joined Tinubu.
After their behind-closed-doors discussion, Obasanjo and Tinubu both declined to speak with the media.
Obasanjo, while speaking at the inauguration of a 300-man planning committee on the installation of the new Olowu of Owu, Oba Saka Matemilola, said he told Tinubu that he had added two phrases to Yoruba vocabularies.

“I asked Bola and he laughed. I said whether the vocabularies are good or bad, we have started using them.”
Chima Ugo is a patriotic Nigerian, a journalist, blogger and singer who is so much interested in the internet, journalism, and blogging and have been for half a decade.