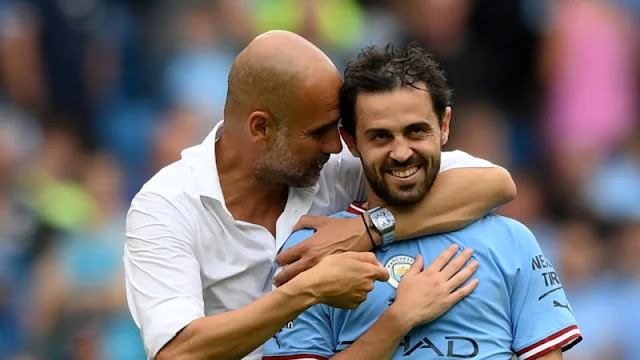 After Bernardo Silva, a dynamic midfielder for Manchester City, inspired his team to a comeback victory against Crystal Palace, 4-2, Pep Guardiola praised Silva as "irreplaceable" for his team.
At the Etihad Stadium on Saturday, Erling Haaland's 19-minute hat-trick garnered all the attention, but Silva's deflection goal offered City a chance to come back after falling behind twice.
The previous week, City battled back from a couple of goals down to tie 3-3 at Newcastle United thanks in part to the Portugal international's goals and assists.
Guardiola complimented Silva for once again stepping up after entirely ruling out moving the 28-year-old to either Barcelona or Paris Saint-Germain last week.
“I’m happy that Bernardo became a winning player,” Guardiola said. “Of course the highlights [against Palace] will be of Erling. But we cannot forget what Bernardo did.

“He scored a goal and created opportunities down the right side in the second half.

“What amazes me about Bernardo is that when the game is going wrong he makes a step forward, he loves to play in this situation. He’s comfortable with it.

“Some players maybe step backward and he makes a step forward. That’s why he is irreplaceable in many ways for us.

“He’s so important for us. He can play in four or five positions. And it’s not just on the pitch, it’s off it too, in the locker room. I want him here so much.”


Haaland took over with a quickfire treble on his second home appearance for the club, with that the ex-Borussia Dortmund striker’s fourth hat-trick in Europe’s top five leagues.

He is the fourth player to net at least six goals in his first four Premier League games after Diego Costa, City legend Sergio Aguero and Mick Quinn.

And Guardiola has been blown away by just how quickly the Norway international has settled in at his new club both on and off the field.

“What’s important is he’s a lovely guy, down to earth,” Guardiola said. “We are completely in love with him. It’s not just the goals, it’s how happy he is.

“I see his behaviour and his body language. You pay attention to the body language of the players and always his is in the right position.

“He’s always there, encouraging the players, making incredible effort. He knows [the chances are] coming. He has an incredible sense of that.”

City have now found themselves trailing by two goals in four of their past six Premier League games, as many as in their previous 84 combined.

The most famous example came on the final day of the previous campaign when hitting back to beat Aston Villa and land a fourth title in five seasons.

While City have become accustomed to doing things the hard way, Rodri accepts there are areas his side need to improve if they are to prevent giving teams a head start.

“We’ve shown we can do it,” the midfielder said. “If it becomes a habit, it is easier so we’re very happy but we have to fix some things.

“We cannot let this team score two goals from nothing. We have to watch out.

“We were talking that last season we conceded one goal from set-pieces for the whole of last season and now we have conceded two in one game. We have to improve in this.

“Sometimes it is not about tactics, it is about talking with the lads [at half-time] and being patient.”