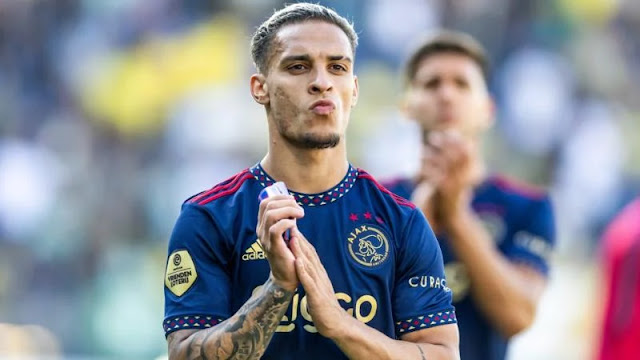 According to rumours, Manchester United and Ajax have reached a deal for the Brazilian winger Antony that might cost up to £85 million ($99 million).
According to the BBC, Sky Sports, and other British media outlets, the Premier League heavyweights have agreed to pay £80.75 million with an additional £4.25 million in add-ons. The transfer window closes on Thursday.
Following the arrival of defender Lisandro Martinez, the 22-year-old Antony might be the second player to join United manager Erik ten Hag from the Dutch champions to Old Trafford.
Ten Hag is seeking to retain Cristiano Ronaldo despite the Portuguese star's desire to depart to play Champions League football. This summer has already seen the arrival of Tyrell Malacia, Martinez, Christian Eriksen, and Casemiro.
The 37-year-old was on the bench for United’s 1-0 win at Southampton on Saturday before making a largely anonymous substitute appearance in the second half.

United remain adamant that the five-time Ballon d’Or winner is not for sale in the second season of his second spell with the club.

“We played with him, so we want him to stay. That is what we want. I hope so,” Ten Hag said.

United will attempt to win a third successive Premier League match at Leicester City on Thursday, hours before the transfer window closes at 2200 GMT.
Chima Ugo is a patriotic Nigerian, a journalist, blogger and singer who is so much interested in the internet, journalism, and blogging and have been for half a decade.