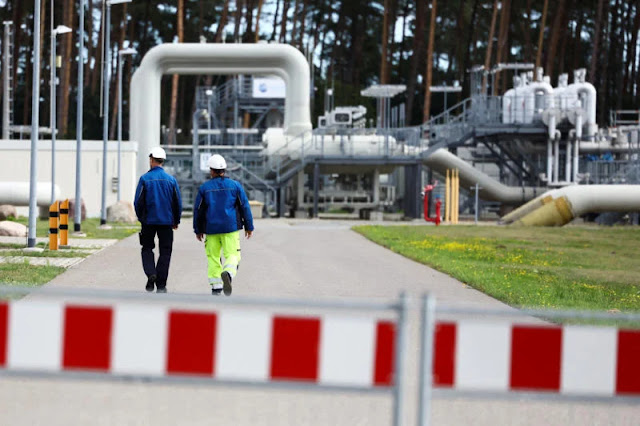 State-owned energy company Gazprom of Russia has once more put a halt to gas delivery on the vital Nord Stream 1 pipeline to Germany, citing upkeep requirements.
The suspension is the most recent in a string of gas supply interruptions that have added to a continuing energy crisis in Europe following Russia's invasion of Ukraine that started on February 24.
On Wednesday, Gazprom announced that deliveries through Nord Stream 1 had been "totally stopped" while "preventive work" was being done at a compressor unit. Shortly after ENTSOG, the operator of the European gas network, announced that deliveries had stopped, the notification was made.
Gazprom has repeatedly maintained the stoppages in supply are necessary for routine maintenance but have been exacerbated by equipment delivery complications created by Western sanctions on Russia.

Germany has accused Moscow of using its energy resources as a weapon.

“We’ll only know at the beginning of September if Russia does that again,” said Mueller, apparently referring to suspensions and reductions of flows in June and July that Russia blamed on maintenance.

The shortages have squeezed consumers and businesses alike, who are reeling from sky-high inflation and the high cost of living. It has forced governments to spend billions to ease the burden.

The situation is expected to worsen as European countries enter the cold winter months, with many homes using natural gas for heating. Some countries, including France, have said fuel rationing is possible.

Since launching its invasion of Ukraine, Russia has also stopped supplying Bulgaria, Denmark, Finland, the Netherlands and Poland with gas while reducing flows via other pipelines.

On Tuesday, Gazprom said it would suspend gas deliveries to its French contractor over a payments dispute. France’s energy minister said that was an excuse, but said the country had already been anticipating the loss of supply.

The European Union is preparing to take emergency action to reform the electricity market in order to bring rising prices under control, with energy ministers scheduled to hold extraordinary talks next week.

‘Nothing interferes with supplies’

Germany, which is heavily dependent on Russian gas, is faring better than expected, with Mueller reporting the country’s gas storage was nearly 85 percent filled.

Europe as a whole is also making progress in filling its gas storage tanks. On Sunday, storage levels were already at 79.9 percent of capacity in the EU.

German economy minister Robert Habeck, who is leading efforts to replace Russian gas imports by mid-2024, says the country currently does not have the needed stores to make it through the winter.

Asked if Gazprom’s supplies would resume after the three-day works were completed on Saturday, Russian government spokesman Dmitry Peskov said “there is a guarantee that, apart from technical problems caused by sanctions, nothing interferes with supplies”.

Western capitals “have imposed sanctions against Russia, which do not allow for normal maintenance, repair work”, he said, appearing to refer to an incident in July when, following 10 days of scheduled maintenance, Nord Stream 1 flows dwindled.

Gazprom said the issue was the result of a key turbine being blocked from delivery to Russia because of sanctions.

Germany, from where the turbine was being sent, said Moscow was the one blocking that delivery.
Chima Ugo is a patriotic Nigerian, a journalist, blogger and singer who is so much interested in the internet, journalism, and blogging and have been for half a decade.