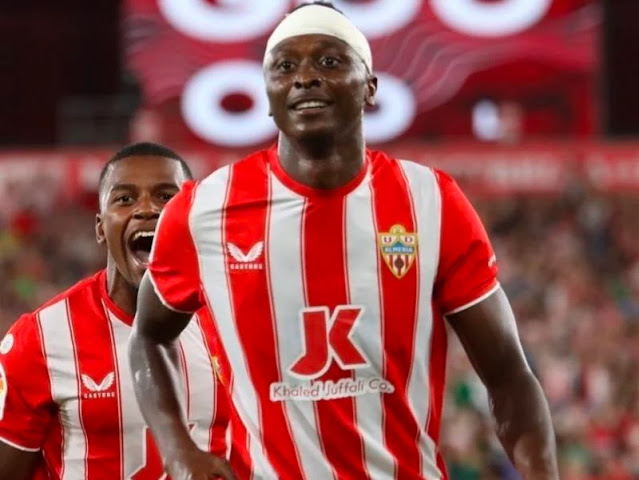 Sadiq Umar, a striker for the Super Eagles, scored his team's second straight goal as Almeria defeated Sevilla 2-1 to climb up to ninth place in the La Liga standings.
He scored in Almeria's tie with Elche last week, and he carried on that strong play as Almeria earned their first victory of the 2022–23 campaign over the squad coached by Julen Lopetegui and having a difficult start to the campaign.
In an unexpected 2-1 victory over guests Sevilla on Saturday night at the Estadio del Mediterraneo, the newly promoted La Liga team defeated Sevilla.
Sadiq's goal in the 55th minute separated the two teams as Almeria continued their modest start to the La Liga season, which has so far included just one defeat (2-1 to reigning champions Real Madrid).
In the opening minutes at the Power Horse Stadium, Oliver Torres, a great midfielder for Sevilla, gave them the advantage.
Largie Ramazani ultimately pulled the hosts even shortly before halftime, demonstrating how well the hosts handled that early setback.
After the restart, it put the game on a razor edge, and the player of the match, Umar Sadiq, produced a lethal finish to give Almeria the victory.
In 77 games, Sadiq Umar has now tallied 40 goals and 13 assists.
The Super Eagles striker was as impressive and hardworking as ever in the win against Sevilla, with the 25-year-old recording a total of one (1) shot on target, two (2) shots off target, one (1) blocked shot and one (1) big chance missed.

The Almeria top scorer from last season also got involved in the general play, feeding off two (2) key passes and created one (1) big chance from his 27 touches all through the game.

Almeria will be in action again on Monday, September 5 when they will visit Real Valladolid at the Jose Zorilla in a bid to continue their good run in the league.

Sadiq looks increasingly likely to stay at Almeria in the coming days despite widespread transfer interest in the Nigerian international in recent weeks.