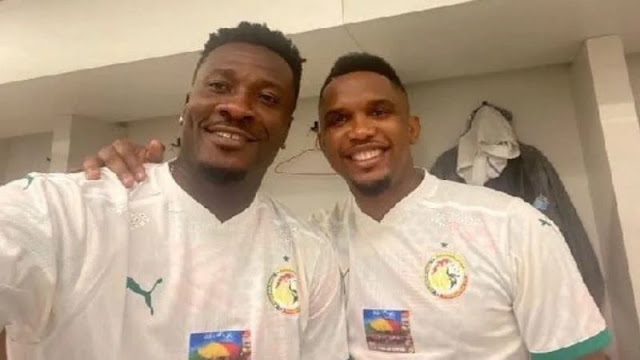 Samuel Eto'o, a former player for Cameroon, is ecstatic to hear that Asamoah Gyan is considering a comeback to Ghana's Black Stars.
Gyan has stated his intention to make a comeback and compete in the Qatar World Cup in 2022 despite not having played for the Black Stars in the previous three years.
The storied striker hasn't played in almost a year, but he's hopeful that getting back in condition would allow Black Stars boss Otto Addo to give him a chance.
The majority of Ghanaians have expressed their sentiments over Gyan's comeback since the interview, however Eto'o Eto'o, who is currently the head of the Cameroonian Football Federation, said on TV3 that he is pleased that Ghana's all-time leading scorer wants to play in Qatar.
However, Eto’o added that the decision to include Gyan is in the hands of Otto Addo, who will name Ghana’s final World Cup squad.

“I am happy that Asamoah Gyan has the desire to return [to the Black Stars]. Asamoah Gyan’s place in the World Cup is the decision of the coach,” Eto’o said.

Gyan has six goals at the World Cup, making him Africa’s leading scorer.

Ghana will face Portugal, South Korea and Uruguay in the group stage of the World Cup, which begins on November 20.

Eto’o, a Qatar Legacy Ambassador, is in Ghana for a two-day working visit.