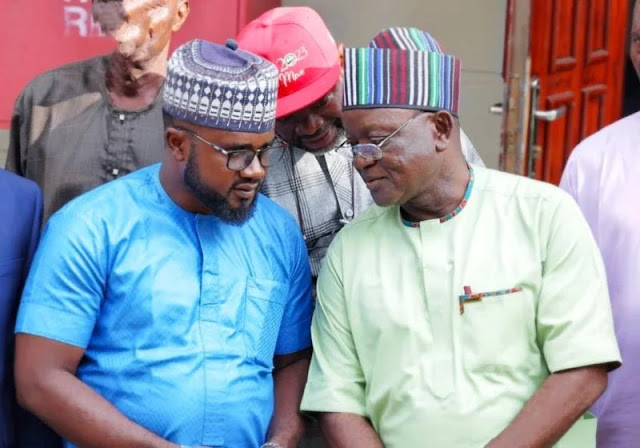 At the weekend, two All Progressives Congress, APC, members of the Benue state House of Assembly—Mr. Thomas Kwagh-Kudi, who represents the Makurdi North State Constituency, and Jacob Orban, who represents the Katsina-Ala West State Constituency—decamped for the Peoples Democratic Party, PDP.
At Saint Mary's Primary School playground in North Bank Makurdi, the Makurdi lawmaker was welcomed into the PDP by Governor Samuel Ortom, National Assembly member for Benue North East District, Senator Gabriel Suswam, Speaker of the State Assembly and PDP governorship candidate, Titus Uba, among other members of the National and State Assembly.
Governor Ortom addressed the crowd and declared that the PDP would "continue to be strong in Benue State and continue to live up to its status as a true people's party."
The Governor asked the populace to "maintain trust with the PDP because it is the party to deliver the country from the APC misrule" while promising Mr. Kwagh-Kudi, the lead defector, and all the defectors equal opportunity within the party.
Additionally, Senator Suswam noted that the PDP's electoral prospects were higher in the upcoming general elections in 2023, stating the party was better positioned for success both locally and nationally.
Benjamin Mzondu, a member of the House of Representatives representing the Makurdi/Guma Federal Constituency, praised the congressman for leaving the APC and pointed out that the PDP was growing stronger in the State as a result of Governor Ortom's people-centered leadership.
Leader of the defectors, Kwagh-Kudi who expressed delight that he was joining the PDP, said he would give his all and work for the victory of the party in all elections.

However, while receiving Mr. Orban of Katsina-Ala West State Constituency and his supporters at the Akume Atongo Stadium in Katsina-Ala, Governor Ortom said the former APC members took a wise decision “to leave a party that has failed Nigerians in all areas.”

Senator Suswam pointed out that with the defection of the APC Assembly member who was from his constituency, the Sankera geopolitical zone comprising, Logo, Katsina Ala and Ukum Local Government Areas, LGAs, had been taken over completely by the PDP.

The governorship candidate of the PDP, Titus Uba said people were running into the big umbrella of the PDP because the party had become a way of life for Benue people and Nigerians in general since it was the only party that could guarantee their safety and protection.

Earlier, leader of the defectors, Mr. Orban who said his defection from the APC to the PDP was to enable him join forces with Governor Ortom to attract development for his constituents, added that Benue belonged to the PDP and he could not remain in a party that had been rejected by the people.
Chima Ugo is a patriotic Nigerian, a journalist, blogger and singer who is so much interested in the internet, journalism, and blogging and have been for half a decade.