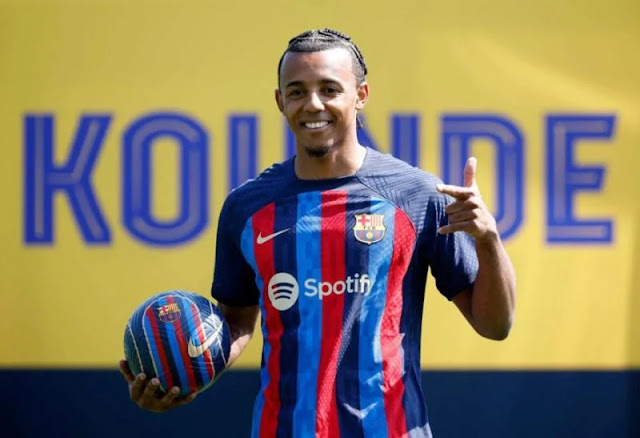 Jules Kounde is still not registered to play for Barcelona, but manager Xavi is optimistic that he will be in the squad to play Real Sociedad on Sunday.
The Catalan giants pulled their fourth and final financial lever, allowing newcomers Franck Kessie, Andreas Christensen, Raphinha, and Robert Lewandowski to be registered for last weekend's goalless draw with Rayo Vallecano.
But Kounde was compelled to watch as his new teammates made their Barcelona debuts in front of a sold-out Camp Nou crowd from the sidelines.
Xavi claims that Barcelona is "on stand-by" to receive the go-ahead for the new Sevilla defender, who cost £46 million, to make his debut this weekend.
‘At the moment, we don’t know anything. We are on stand-by,’ Xavi told a news conference ahead of their trip to San Sebastian.

Barca need to comply with LaLiga’s salary cap rules to register Kounde, and potential sales of strikers Pierre-Emerick Aubameyang and Memphis Depay could make this possible.

‘We are waiting. Kounde is a great leader and a great player. Hopefully he shows it soon – tomorrow, if he can play.

‘He has trained very well, I see him in good spirits, but we need to sell players to be able to register him.’

Xavi also stated Aubameyang will be in the squad but failed to rule out his departure amid interest from Chelsea.

‘The transfer market ends on Aug. 31 and we don’t know what will happen,’ Xavi said.

‘Auba and Memphis are still here, so tomorrow we will use them. But the priority is to register Kounde.’

Barca have taken several steps to increase their revenue in order to offset losses, reduce their debt and comply with LaLiga’s financial fair play rules.

They have sold stakes in their audiovisual studio, their licensing and merchandising division and even part of their LaLiga TV income rights to help balance the books.

They also signed a shirt and stadium sponsorship deal with Spotify.

On the other hand, they approved financial plans last December to renovate Camp Nou, including raising an additional 1.5 billion euros in debt.
Chima Ugo is a patriotic Nigerian, a journalist, blogger and singer who is so much interested in the internet, journalism, and blogging and have been for half a decade.