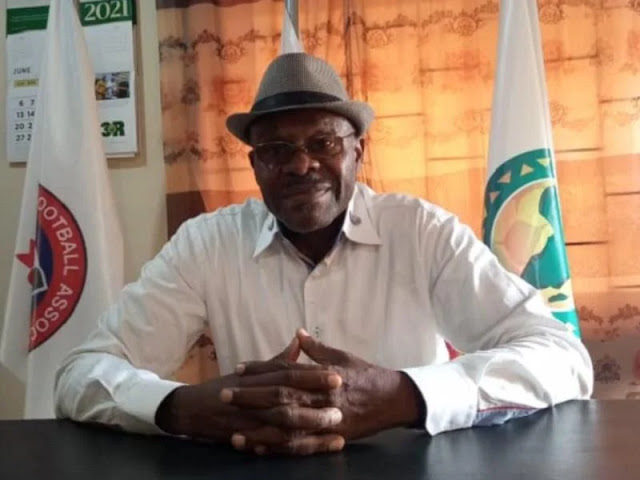 Former First Vice President of the Nigerian Football Federation (NFF), Mazi Amanze Uchegbulam, has expressed interest in taking over for outgoing President Amaju Pinnick.
At the FA office in Owerri, the capital of Imo State, Uchegbulam, the current chairman of the Imo Football Association, yesterday announced his intention to football stakeholders.
As he vowed to bring Nigeria back to the international scene, he criticised the appalling status of football in the nation.
"In a football game, you wait for the referee to announce the official start of the game. Now that the game has been proclaimed open, I today declare my interest in being the next NFF President to improve the reputation of Nigerian football administration, Uchegbulam remarked.
“In response to the motion moved in May 2022 by the Imo Football Association during our congress that I should view for the position, I’m here to say I have consulted widely and have the support of my family. I have decided to contest for the position as clamoured by all”, the FA boss said.

According to him, he is 68 years old and not 74 years as claimed by mischief makers, saying since he was elected First Vice President, his age has not changed even as he called for accuracy from the media and all and sundry.

He continued: “Nobody is happy with the current state of the league, it is almost moribund, and we need to get people who understand football administration to fix it. We need to restore transparency, image of the NFF, ensure prompt payment of referees and match Commissioners, it is time to bring the best and I guarantee you that in four years under my watch, you all will be proud of NFF.

“I assure you that if I handle football administration for four years, you will thank me because I’m known for transparency and work, it is time to get back the NFF of our pride”, Uchegbulam said.

He disclosed that having served at different times in FIFA, CAF, and NFF, he had the experience and knowledge required, saying: “While I was a member of the Technical Committee with Adegboye Onigbinde as Chairman, Nigeria won the African Nations Cup (1994), qualified and had a good showing at our first ever World Cup appearance in USA 94.

“We also won the Olympic Gold Medal in Atlanta Georgia in 1996. We raised the 1994, 1996, 1998 teams which till date remains our best team. I will re-enact that magic and give you a Super Eagles we will all be proud of.

“While I was first Vice President, Nigeria qualified for nine World Cups including the Under 17 ,Under 20, Under 23, male and female, Super Falcons and Super Eagles plus Beach soccer. It was a feat only achieved by Brazil in the whole world. Please go and verify. This was under Sani Lulu.

“I served in CAF for 12 years and handled 33 cases and none of the verdict has been faulted till date because I operated above board. I have worked with different Presidents of the Football House and I know what works. I will reactivate the under 13, 15 teams where we discovered the likes of Kelechi Iheanacho.

“We need to domesticate our Statutes to end litigations in court. It is time we put the administration of football in the hands of technocrats. Under my watch, Nigeria will develop and use local coaches, enough of foreign coaches who are not on ground and don’t give good results. Amanze Uchegbulam is the man, make me the NFF President and I will make you proud as Nigerians,”, he said.
Chima Ugo is a patriotic Nigerian, a journalist, blogger and singer who is so much interested in the internet, journalism, and blogging and have been for half a decade.