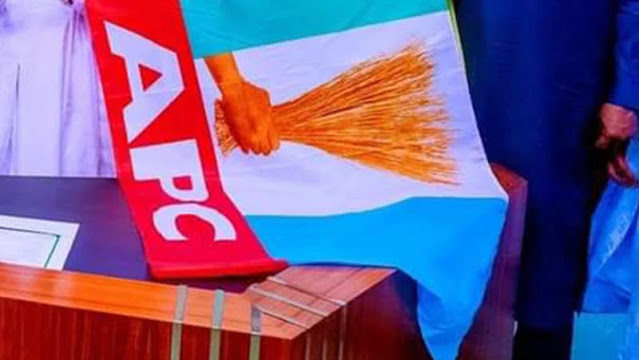 All Progressives Congress (APC) state governors will act as the state, zonal, and regional coordinators of the APC Presidential Campaign Council for the 2023 election.
The list of 422 members for the ruling APC, which was issued late on Friday, includes President Muhammadu Buhari, governors, previous and current ministers, parliamentarians, party executives, and others.
Bola Tinubu, a contender for president, and Abdullahi Adamu, the party's national chairman, will act as Buhari's deputy in the campaign council.
Kashim Shettima, vice presidential candidate, serves as the council's vice chairman.
Vice President Yemi Osinbajo, whose name was absent from the list made public by the council secretary James Faleke, received no position.
One of the candidates Tinubu beat in the primary election in June was Osinbajo.
As the council's director general, Governor Simon Lalong of Plateau State will have the assistance of Hadiza Bala Usman and former APC National Chairman Adams Oshiomhole.

Among the governors named as members of the council are Ben Ayade, who is to coordinate his state, Cross River and the South-south zone.

Governor Rotimi Akeredolu of Ondo State will coordinate the campaign in his state and in the South-west geo-political zone.

The National Vice Chairman of the All Progressives Congress APC South-south, Victor Giadom and Isaac Kekemeke from Ondo, will serve as deputy zonal coordinators to Messrs Alade and Akeredolu respectively.

The Governor of Imo State, Hope Uzodinma, is to coordinate the campaign in both his state and the South-east zone.

Abubakar Bello of Niger State and Muhammed Yahaya of Gombe State are to replicate the role in the state where they are governors as well as in the North-central and North-east respectively.

The Governor of Zamfara, Bello Matawalle, will oversee his state as well as the North-west. The controversial former Director-General of the Progressive Governors Forum (PGF), Sahilu Lukman, will serve as his deputy zonal coordinator.

The Governor of Borno State, Babagana Zulum and his counterparts in Kwara and Nasarawa States, Abdulrahman Abdulrazak and Abdullahi Sule, are to coordinate their respective states.

Dapo Abiodun of Ogun, Babajide Sanwo-Olu of Lagos, Gboyega Oyetola of Osun and Mala Buni of Yobe are to also play the same role in their states.

Governors Mala Buni, Abdullahi Ganduje, Nasir El-Rufai and Aminu Masari are to coordinate the campaign in their states- Yobe, Kano, Kaduna and Katsina.

Governor David Umahi will not only coordinate the campaign in Ebonyi State but also in the entire southern region. He will be assisted by the National Deputy Chairman (south), of the APC, Emma Eneukwu.

The APC, in states it has no sitting governor, appoints its ex-governors, governorship candidate or businessman for the top job.

A Catholic priest, Hyacinth Alia, who is the governorship candidate of the party in Benue will coordinate Tinubu’s campaign in the state.

A former governor of Abia State and serving senator, Orji Kalu, will oversee his state while Lucky Imuseun, a former governorship aspirant, will lead the team in Edo State.

Deputy Senate President, Ovie Omo-Agege and billionaire businessman, Tony Cole, have also been tasked to coordinate the campaign in Delta and Bayelsa for the party in the coming polls. Messrs Omo-Agege and Cole are the APC governorship candidates in their states.

Timipre Sylvia, a former Bayelsa governor and current petroleum resources minister, is to lead the campaign in the state while a former Senate Leader, Teslim Folarin, will play that role in Oyo State.

No name was announced for Taraba.

The APC campaign list has 96 persons more than that of its main opposition, PDP.
Chima Ugo is a patriotic Nigerian, journalist and blogger who is so much interested in the internet, journalism, and blogging.