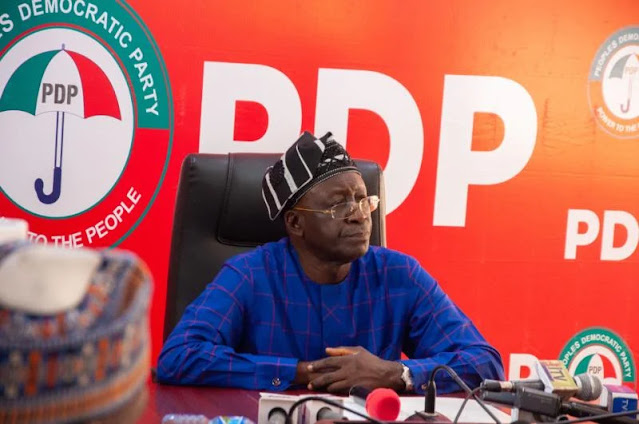 The All Progressives Congress has made mockery of Iyorchia Ayu, the national chairman of the People's Democratic Party, for his disagreement with Nyesom Wike, the governor of Rivers State.
The APC stated in a statement released on Tuesday by its National Publicity Secretary, Felix Morka, that the politician from Benue should stay out of the issue within the PDP and not involve the opposition party.
Since Atiku Abubakar, a former vice president, earned the presidential nomination of the major opposition party, Wike and Ayu have been at odds.
Ayu stated he won't resign until his four-year term is over, despite Wike's demands that he do so to make room for a southerner.
The statement from APC is follows;
“As he struggled to deny a statement credited to him that Governor Wike could not father a child, Ayu alleged, ridiculously, that the APC and other mischievous people were planting such stories in the media and stoking the feud between him and the Rivers State Governor.

“Understandably, Chairman Ayu is deep in quicksand and swinging wildly in search of third parties to blame for the internal combustion in the party that he leads.

“With such an escapist mindset, it is not difficult to see why the meltdown in the PDP has proven intractable on his watch. Lacking forthrightness and character to accept responsibility for the crisis in his party, how can he possibly resolve it?

“Unlike the party of Ayu, the APC does not “plant stories” and does not meddle in the internal affairs of other parties. That is an area of extreme and unrivaled competence of the PDP. In any event, the PDP is unraveling unstoppably and needs no help from the outside.

“Rather than distract himself in search of an illusory scapegoat, Ayu and stakeholders of his withering PDP should concentrate on finding an anchor to slow the Party’s rudderless drift.

“How can a party that has proven incapable of governing itself seek to govern a country as important as Nigeria? After 16 years of ruthless misgovernance and crass failure to reform and reposition itself, quite frankly, the PDP stands morally disqualified from asking Nigerians for their votes in the next general election.

“On our part, we will remain focused in search of new and creative ways of improving the quality of life of our people, and working to convince them to renew our mandate again in 2023.”
Chima Ugo is a patriotic Nigerian, a journalist, blogger and singer who is so much interested in the internet, journalism, and blogging and have been for half a decade.