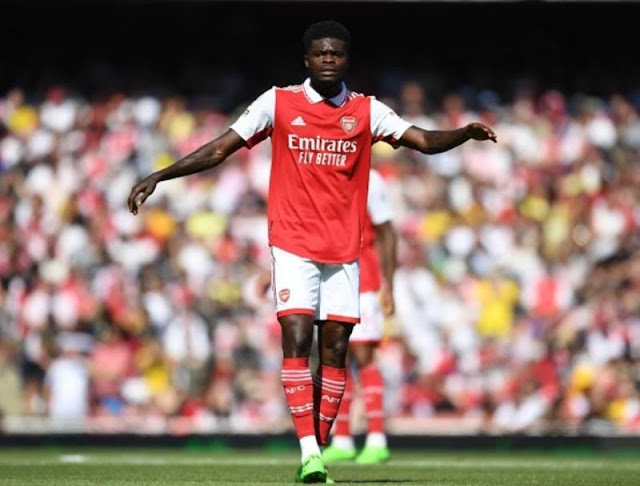 Despite having a thigh injury, Thomas Partey of Arsenal has been selected by Ghana for the upcoming international break.
The former Atletico Madrid star hasn't played for the Gunners since their convincing 3-0 victory away at Bournemouth in late August, raising concerns that his comeback could be hurried if he plays for his nation in the upcoming weeks.
Partey has a remote possibility of being included in the Arsenal lineup for Sunday's match against Everton after missing three straight Premier League games (Fulham, Aston Villa and Manchester United).
The 29-year-old has picked up a thigh problem after suffering from a similar injury in the final stretches of last season as Arsenal just missed out on the top four.

Now the Ghanaian is targeting a swift return, although Mikel Arteta is still keen to manage the player’s fitness carefully.

Yet Ghana are wasting no time at all in calling upon their talisman, naming Partey in the squad for upcoming World Cup warm-up games against Brazil and Nicaragua.

Arteta previously warned that he wants to take things slowly with his midfielder to avoid aggravating any fitness issues and creating any risk of longer lay-offs.

“We have tried to manage him,” said Arteta. “A lot has happened since he joined, obviously, and we are trying the best possible way to find the reasons why that happens.

“But unfortunately the body and the mind are too difficult sometimes to understand and put a finger on a single thing to try to prevent something from happening.

“The attitude of the player is there with his willingness. He is really disappointed again obviously as you can imagine and the team needs him. So, we need him back.”

Partey has logged 24 Premier League appearances in each of his previous two seasons at the Emirates since his deadline day transfer from Atletico in October 2020.

However, Arsenal would like him to feature more prominently if they are to maximise their chances of securing Champions League qualification.

Arteta also admitted that Partey is still suffering from problems with the same thigh that was injured last season, although the recent issue is not of the same severity.

He added: “It’s a similar area, hopefully not as bad.”

Albert Sambi Lokonga has been filling in for his absent team-mate – starting the past two Premier League fixtures against Aston Villa and Manchester United.
Chima Ugo is a patriotic Nigerian, a journalist, blogger and singer who is so much interested in the internet, journalism, and blogging and have been for half a decade.