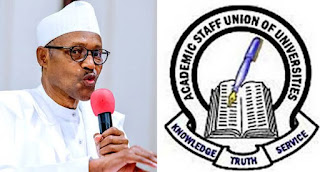 The Committee of Vice-Chancellors of Nigerian Universities (CVCNU) has formed a long-term peace team to break the impasse between President Muhammadu Buhari's administration and the Academic Staff Union of Universities (ASUU).

Michael Faborode, former secretary general of the CVCNU and team co-coordinator, confirmed this on Tuesday in 'The Sustainable Peace Team Working Paper.'

He explained that the team's desire was to avoid the current deadlock in the ASUU strike negotiations, as the strike had taken a massive toll on all stakeholders and the nation.

According to him, no serving vice-chancellor or pro-chancellor was included in the final list, and membership was determined based on the CVCNU's record of service.

"As elders, we should not fold our hands and watch our 'house' collapse on us. As a result, we must speak or act now. We have no other industry besides the university system," the team's leader noted. "Anything that can be done to bring all of the actors to reason and broker peace using the Prof Nimi Briggs committee recommendations as a fulcrum will be worthwhile," the team's leader added.

Mr Faborode stated that the 'Peace Team of Elders' would work under the supervision of the CVCNU/CPC.

According to him, the Buhari administration and ASUU were contacted and asked to accept the intervention of an independent panel of elders.

"The team will work with the Prof Nimi Briggs committee to understand the basis of their proposals and will consult with both the federal government and ASUU to identify areas of concern and objection," he added.

"Following that, the team will brainstorm on how to mitigate the thorny areas and work with all parties to bring the imbroglio to a peaceful conclusion in the interests of all involved and the nation."

These include the regime increasing its salary increase offer from 23% to "perhaps 50%, ensuring a professor receives up to N800,000 monthly as opposed to the negotiated N1.2 million."

"Also, the review of the decision on salaries during the strike to a mid-point, not zero percent or one hundred percent, as ASUU desires." "How can we reinforce this warning to both sides?" Mr Faborode went on to say.

"Fundamentally, the following facts should be noted: the current state of Nigerian higher education is unacceptable and incompatible with the economic development roles envisaged for them," he added. For far too long, things have been allowed to deteriorate."