At least 10 people killed, several missing in flooding in Italy 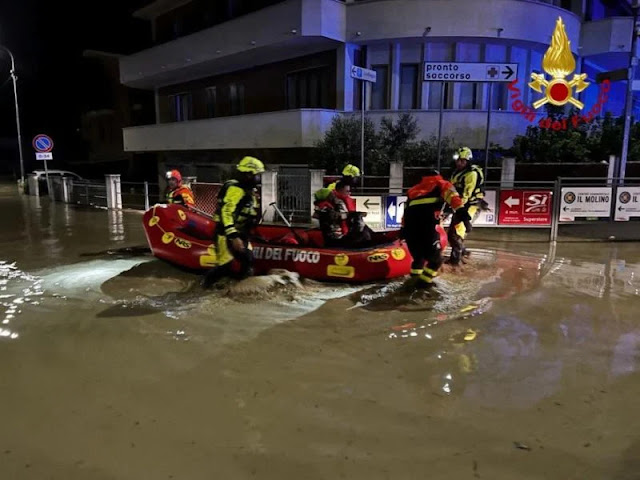 State radio reports that 10 people are dead and several are missing after floodwaters brought on by heavy rain surged through numerous villages in a hilly area of central-east Italy.
Numerous people climbed trees or rooftops early on Friday to wait for help.
Mayor Riccardo Pasqualini of Barbara, located in the Marche area close to the Adriatic Sea, described the torrential deluge that wreaked havoc on his town on Thursday evening as “not a water bomb, it was a tsunami.”
Firefighters reported seven confirmed fatalities and three individuals missing; however, RAI state radio reported ten deaths.
Four individuals remained missing as of late Friday morning, including two toddlers, one of whom had been swept out of his mother’s arms in Barbara by raging floods.
According to Barbara’s mayor, a woman and her daughter, who is around 8 years old, went missing while attempting to flee the floodwaters.
Many of the 300 firefighters sent into action wade through waist-deep water in flooded streets, while others pilot rubber dinghies to rescue people they came across.
Firefighters claimed on Twitter that they had saved dozens of individuals hanging from trees, cars, and rooftops. In the farther-flung settlements, helicopters were also used to rescue individuals and fly them to safety.
“It was an extreme event, more than an exceptional one,” climatologist Massimiliano Fazzini told state TV.

He said that based on his calculations, the amount of rain that fell, concentrated over four hours and in particular in 15 minutes, was the most in hundreds of years.

Some of the worst floodings struck the town of Senigallia, while small towns in the hills near the Renaissance tourist town of Urbino were also deluged when fast-moving rivers of water, mud and debris rushed through streets.
Chima Ugo is a patriotic Nigerian, a journalist, blogger and singer who is so much interested in the internet, journalism, and blogging and have been for half a decade.