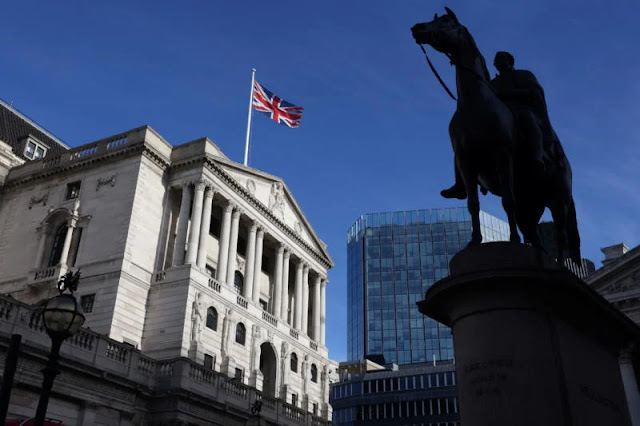 On Thursday, the Bank of England increased interest rates once more to combat rising inflation and issued a warning that the UK economy had already entered a recession.
The BoE's decision comes at the end of a hectic week for central banks, during which its counterparts in the US and other parts of Europe tightened their own monetary policies as part of global attempts to rein in runaway inflation.
The decision by the British central bank was put off from last week when Queen Elizabeth II passed away.
The BoE increased its main rate by 0.5 percentage points to 2.25 percent, repeating its August increase, which was the largest increase since 1995. In doing so, it met the majority of market forecasts.
The BoE might have imitated the European Central Bank and the US Federal Reserve and unexpectedly raised interest rates by 0.75 percentage points, which would have been the biggest increase in thirty years.
Consumer prices have soared to their greatest levels in decades due to escalating energy and food costs following Russia's invasion of Ukraine.
In response, central banks raised interest rates, which stoked concerns about an impending recession by raising loan repayments for both consumers and businesses and aggravating the cost-of-living crisis in the UK.
The UK had already entered a recession, according to the BoE.
One day after Sweden's Riksbank surprised the markets with a leap of a whole percentage point, the Fed announced a 0.75 percentage point increase on Wednesday, its third consecutive big hike.
On Thursday, the Swiss National Bank unleashed a 0.75-percentage-point hike that lifted its policy rate out of the negative territory for the first time since 2015, meaning depositors no longer have to pay to park their money at the bank.

On Thursday, the Norwegian central bank raised its rate by 0.5 percentage points, taking it to its highest level in more than a decade.

Bucking the trend, the Bank of Japan kept its ultra-loose monetary policy unchanged, sending the yen to a fresh 24-year low against the dollar.

The BoE earlier this month defended itself against accusations of being too slow to tackle sky-high inflation after new Prime Minister Liz Truss proposed to review its operational independence.

UK inflation eased to 9.9 percent in August but remains near a 40-year high.

Truss on Wednesday launched a six-month plan, starting in October, to pay about half of energy bills for businesses, charities, hospitals and schools, as she sought to soften the economic blow of sky-high prices.

The premier had already announced plans for a two-year energy price freeze for cash-strapped households.

Finance minister Kwasi Kwarteng will unveil Friday a mini-budget of tax cuts designed to boost economic activity, and will also outline the vast cost of the energy assistance.

Yet the package threatens to ultimately push inflation higher as a result of strengthening demand, according to US bank Citi.

“While the capping of energy prices is disinflationary in the first instance, we continue to see many of these measures as boosting demand and increasing the risk of more embedded inflation,” wrote Citi analysts in a research note.

Commentators also warn the measures will ravage public finances that are already reeling from huge spending during the deadly Covid pandemic.

Barclays bank analysts estimate that the government’s total cost-of-living expenditure could reach a colossal £235 billion ($267 billion).
Chima Ugo is a patriotic Nigerian, a journalist, blogger and singer who is so much interested in the internet, journalism, and blogging and have been for half a decade.