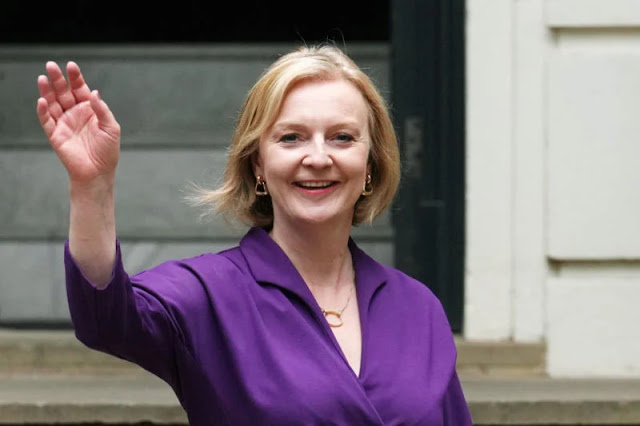 The third female prime minister of Britain holds the same right-wing political views as her top cabinet officials. Additionally, they are all individuals of colour.
No white men will hold any of the four "major offices of state"—prime minister, Treasury, foreign office, and home affairs—for the first time in UK history.
Even so, 10 Downing Street may now be home to the first member of an Indian ethnicity in Britain. To replace Boris Johnson, the ruling Conservative party chose Liz Truss over Rishi Sunak.
The Conservatives, who have historically been the party of the wealthy establishment, have advanced racial and gender equality more than the center-left Labour opposition.
Labour has still to elect a permanent woman leader, but surveys show it retains a hold on most non-white voters who credit its progressive economic policies and its historical fight against racism.

Labour’s deputy leader Angela Rayner admitted the Tories were ahead in their visible diversity.

“That’s progress, and that’s really welcome. We do need diversity,” she told BBC radio Tuesday as Truss prepared to announce her senior team.

But Rayner added: “It’s about what you do as well as where you come from.

“Liz Truss has been part of the (Johnson) cabinet that has made the decisions that have got us into the mess that we’re in.”

With arguably the toughest brief at a time of economic crisis, Kwasi Kwarteng was appointed by Truss to become Britain’s first black chancellor of the exchequer.

As the first black foreign secretary, James Cleverly will offer a different diplomatic face for a country that once ruled a quarter of the planet.

Suella Braverman, whose family roots are in India, was meanwhile named home secretary with oversight of policing and immigration.

The new ministers are ardent opponents of “woke” awareness in race, and support UK plans to send would-be migrants arriving by boat to Rwanda.

University of Manchester political scientist Rob Ford said many minority politicians in the Conservative party “have extremely individualist views about race and disadvantage”.

They believe that “anybody can succeed regardless of their background”, he told AFP, arguing also that it was now commonplace to see people of colour occupying top jobs in UK politics.

“The very fact that this is now kind of banal is what makes it remarkable,” Ford said — while stressing that social class remains a daunting barrier.

When David Cameron became Tory party leader in 2005, he encouraged a new generation of Tories of colour, and women, to stand for parliament and take the electoral fight to Tony Blair’s “New Labour”.

Truss herself was a beneficiary of Cameron’s selection reforms.

But it still helps to have gone to the right school.

Kwarteng studied at the exclusive Eton College — Cameron and Johnson’s alma mater — before going on to the University of Cambridge, where Braverman also did her degree.

Cleverly was privately educated too, before entering the army.

Sunder Katwala, director of the research group British Future, said the Conservatives still have work to do to erode Labour’s lead among minority voters.

“The left doubts if ethnic faces in high places make much difference, especially if they replicate the educational privileges of the existing elites,” he wrote in the Eastern Eye newspaper.

There were eight candidates at the start of the Conservatives’ leadership race in July: half were women, and half were from ethnic minorities.

They included the right-winger Kemi Badenoch, who is also tipped for a role in the Truss cabinet.

Badenoch and Braverman are both enthusiastic combatants in Britain’s “culture wars”.

The new home secretary earned a rebuke from Jewish leaders in 2019 when she attacked “cultural Marxism” — an anti-Semitic jibe coined by the Nazis and popular today among the far-right.

But such outspokenness has made the likes of Braverman, Badenoch and former home secretary Priti Patel popular with the older and largely white Tory membership, if less so among minority voters at large.

Katwala cautioned: “Some feel it can even be actively regressive if ethnic minority ministers feel a particular pressure to outflank their colleagues on the right.”
Chima Ugo is a patriotic Nigerian, a journalist, blogger and singer who is so much interested in the internet, journalism, and blogging and have been for half a decade.