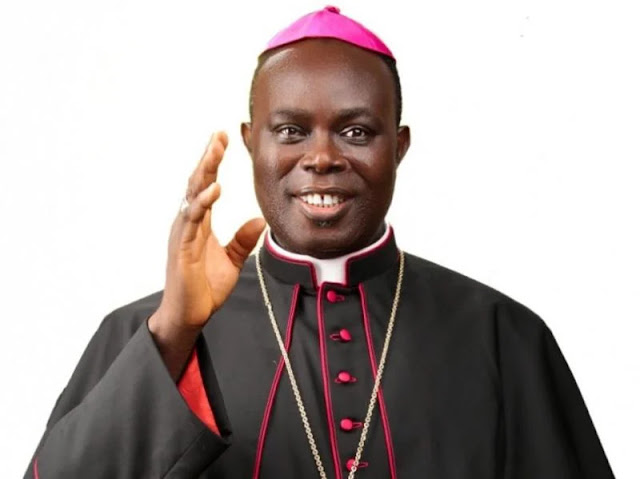 According to Rev. Peter Chukwu, the catholic bishop of the Abakaliki Diocese, President Muhammadu Buhari has not brought any cases against individuals who are supposedly exploiting him to Islamize Nigeria.
He claimed, "That is why the administration is powerless to address the issues."
Speaking to journalists during the official opening of the CAMPAN chapter in Ebonyi State, the bishop noted that rational people are no longer at ease with the current state of the nation.
On the issue of insecurity, Chukwu stated that “We have lost faith in the current government to restore security,” adding that Nigerians are already disappointed with the APC-led Government, following its inability to combat crimes and criminality in the country.

According to the Catholic Bishop of Abakaliki Diocese: “We have lost so many Priests in the North and also in the southeast and it is so worrisome but I am not surprised because Priests and Prophets are always the victims of persecution throughout church history. It shows what the Priests represent and stand for, and what we preach is pricking them in their conscience, and instead of repenting, they decided to fight back by killing, kidnapping, torturing, and destroying our churches.

“But I am consoled by the statement of Christ in Matthew 16 vs 35 that no gates of the underworld shall ever prevail against the church. The church comes out strong when you push it to the wall.

“It will be unfair to say that the church as a body has compromised. Many individuals who work for the church and feel that they are very friendly to the government are no longer holding the government accountable but if you listen to what is preached in the different dioceses, you will see that no Priest is comfortable when any government is not doing what it is supposed to do for the masses and we are also vocal about it and we are always critical about it.

“But we want to be constructive in our criticisms; no Priest who has been well trained can feel comfortable in the face of all the terrible things that have been happening around.

“When Buhari was campaigning for the Presidency, he was coming with his credentials as a former military leader who was an anti-corruption crusader who did not tolerate any corruption or nonsense. They promised to nip in the bud, all cases of Boko Haram attacks. Unfortunately, when he took power, he failed to prosecute those people using him to Islamize Nigeria and that is why the government is helpless to combat the problems.

“If you look closely, you will see that all the leaders of our security apparatus are from the core Fulani North. It has never been like that in the history of Nigeria. There is an imbalance in the appointments of the Leaders of the security architecture. It is so lopsided that they will always execute their agenda without much opposition.

“Come to think of it again, a lot of people have lost their voices because what you say will come after you but despite that, rational people are very uncomfortable with what is going on. It is unfortunate. We have lost faith in the current government to restore security.

“What we are praying for is a peaceful, free, and fair election that will usher in God’s chosen leaders who will solve the problems of this country, and if that problem is not solved, the continued existence of Nigeria as a corporate entity is under a very serious question mark.”
Chima Ugo is a patriotic Nigerian, a journalist, blogger and singer who is so much interested in the internet, journalism, and blogging and have been for half a decade.