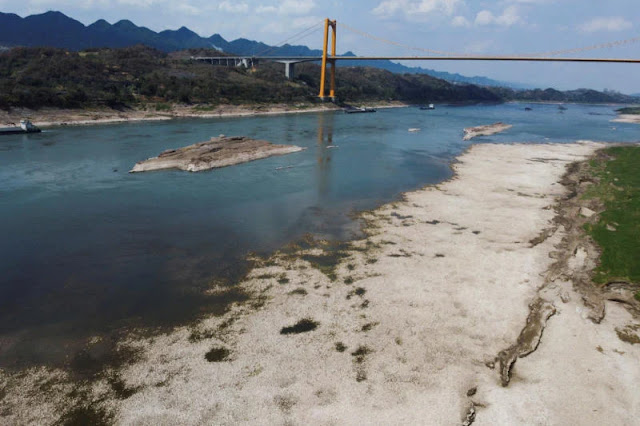 Chinese provinces intend to invest billions of dollars in new water infrastructure in an effort to combat the growing effects of extreme weather on agriculture and hydropower after a record heatwave dried up significant portions of the Yangtze basin.
The extended drought in southwest China has hindered electricity transmission to other parts of the nation and exposed the hydropower-dependent regions' susceptibility to dropping water levels, such as Sichuan.
Authorities are worried about the impact of low rainfall on the forthcoming autumn harvest because per capita water resources are already only a fraction of the world norm. Some estimates imply that 20% of China's crop may be damaged.
Drought-hit regions have been digging emergency wells and deploying firefighters and cloud-seeding rockets to irrigate crops, but governments are also turning to larger, long-term water infrastructure.

“Because of the strong extremes, and the worsening of both floods and droughts, the ability to store and transfer water becomes very important,” Mao Liuxi, an expert with the China Meteorological Administration, told a recent teleconference.

The Ministry of Water Resources has already approved 25 big projects this year, with total investment of 1.7 trillion yuan ($246 billion).

Hubei province in central China, which has been severely affected by the Yangtze drought, started work on 18 massive water projects on Wednesday and expects to spend 176 billion yuan on them between 2021 and 2025.
Yunnan, in southwest China, also started construction on four significant water storage projects last month, with a combined cost of 211.8 billion yuan.
To manage its rivers, China has always relied on extensive infrastructure projects. In addition to producing energy, the massive Three Gorges Dam was built to control the Yangtze River, which supplies water to around one-third of the world's population.
With channels already in place in eastern and central China to use Yangtze waters to refill the parched north, China has also been constructing the vast South-North Water Diversion Project.
“There’s a mentality that there’s always an engineering, infrastructure solution,” said David Shankman, a geographer with the University of Alabama who studies China’s water system.

“They are trying to plan for the exceptional, but you can’t predict the future.”

With around 80% of Sichuan’s energy supplies coming from hydropower, the drought forced authorities to shut down industries and ration power for households.

In response, China’s energy bureau said it would build more grid infrastructure and develop alternative energy sources. It also vowed to speed up the construction of more dams on the Yangtze’s upper reaches.

In theory, the construction of more upstream hydropower plants, particularly in parts of Tibet where melting ice in spring and summer could be diverted into reservoirs, could help even out seasonal water flow changes.

China already stores huge amounts of water in its giant reservoirs, and says they serve an important function in limiting flood damage during rainy seasons.

But critics say the projects are costly, environmentally damaging and remain at the mercy of unpredictable weather.

“Water engineering projects are neither the best solution, nor the only solution,” he said.
Chima Ugo is a patriotic Nigerian, a journalist, blogger and singer who is so much interested in the internet, journalism, and blogging and have been for half a decade.