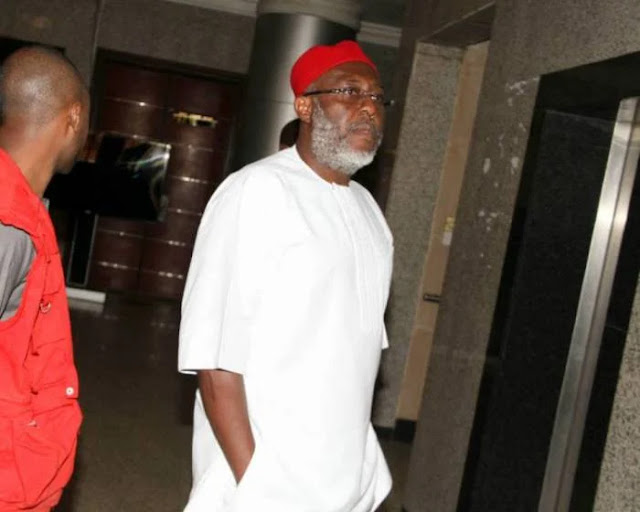 A federal high court in Abuja has dismissed a money laundering charge filed against Olisa Metuh, the Peoples Democratic Party's former national publicity secretary (PDP).
The presiding judge, Emeka Nwite, ruled on Monday that the new accusation by the Economic and Financial Crimes Commission (EFCC) is an abuse of the court process.
Metuh was charged with seven charges of money laundering in 2016 after allegedly collecting N400 million from the office of the national security adviser.
Okon Abang, a federal high court judge, found Metuh guilty on all counts and sentenced him to seven years in jail on February 25, 2020.
Dissatisfied with the court’s decision, Metuh, through his counsel, filed an appeal in March 2020.

As part of the 10 issues raised for determination by the appellate court, Metuh argued that he was not given a fair trial.

He submitted that the trial judge was biased, citing some of the remarks made during the trial.

Delivering judgment on December 16, 2020, a three-member panel of justices agreed that the trial judge showed bias against the appellant.

Consequently, he was released from prison on December 24, 2020.

In line with the court of appeal order, Metuh’s case file was re-assigned to Emeka Nwite for the defendant to take a fresh plea.

The EFCC subsequently approached the supreme court to challenge the verdict of the court of appeal.

At the resumed court session, Metuh, through his lawyer, Afam Osigwe, challenged the legal propriety of the new charge against him and urged the court to strike it out.

But the EFCC, through its lawyer, Olanrewaju Adeola, prayed the court to adjourn the case indefinitely pending the outcome of the appeal.

Osigwe, however, asked the court to strike out the fresh charge filed by the EFCC.

“From issues set out at the supreme court, there is no way the matter will come back to this court,” he said.

“The appropriate action is for this court to strike out the matter, while the supreme court decides on the appeal before it.”

In his ruling, the judge noted that the EFCC ought not to have filed a fresh charge since its appeal against the appellate court’s decision is still pending at the supreme court.

“It is uncalled for… for the prosecution to bring a fresh charge when the other charge is still pending. The action is in gross abuse of the court process,” the judge said.

“Consequently, the charge is hereby struck out for constituting an abuse of the court process.”
Chima Ugo is a patriotic Nigerian, journalist and blogger who is so much interested in the internet, journalism, and blogging.