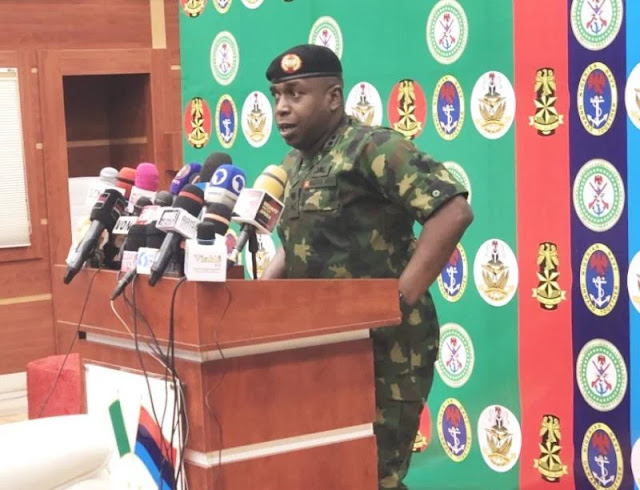 No less than 38 ISWAP terrorists have died in the feared Sambisa forest in Borno State during the past two weeks as a result of the big assault against terrorists by Nigerian forces on the frontlines.
News reporters were informed by the defence headquarters that troops had successfully completed a number of kinetic and non-kinetic missions in several theatres of operations.
Director of Defence Media Operations (DMO), Major General Musa Danmadami, briefed defence reporters on the troop accomplishments. He said that troops of the Operation HADIN KAI theatre of operation have maintained aggressive operations to deny terrorists more freedom of action.
“In furtherance to this, troops conducted fighting patrols, ambushes and clearance operations at communities, villages and towns in Kukawa, Monguno, Kaga, Dikwa, Biu, Damboa, Gwoza, Mafa, Konguda, Bama and Guzamala Local Government Areas all in Borno State.

“Of significance was the neutralization of 2 key Boko Haram Terrorists/Islamic State of West Africa Province commanders on the 12th and 15th September 2022 identified as Abu Asiya and Abu Ubaida (A Qaid) at Parisu and Sheruri general area in Sambisa forest respectively.

“Equally, a total of 368 suspected Boko Haram Terrorists/Islamic State of West Africa Province criminals and their families comprises 53 adult males, 116 adult females and 214 children surrendered to own troops at different locations in the theatre. All recovered items rescued civilians and apprehended suspected terrorists were handed over to the relevant authority for further action while surrendered Boko Haram Terrorists and their families are being profiled for further action.

“In a related development, the air component of Operation HADIN KAI on 9 September 2022 while acting on credible intelligence conducted air interdiction operation at Somalia in Sambisa Forest and bombarded a terrorist critical facility. The air strike inflicted deadly casualties on the terrorists as feedback revealed that several of the terrorists were neutralized while several structures were destroyed after the strike. A similar operation was carried out on terrorist enclaves at Abdallari, Mafa, Zanari and Tumbun Baba between 10 and 14 September 2022, the airstrikes led to the neutralization of several terrorists with several of their structures destroyed in the strikes.”

In the North Central zone, as part of a non-kinetic approach to resolving lingering security challenges in the Plateau, the Commander of the Special Task Force Operation SAFE HAVEN on September 10, 2022, at its Headquarters in Jos declared open a 26-man joint peace committee summit led by Justice Daniel Longji (Rtd) to sensitize communities in the Plateau State on the need for peaceful coexistence.

According to General Danmadami, “Also, on September 16, 2022, following report on activities of the outlawed cultist group known as Sara Suka boys, troops in conjunction with vigilantes carried out raid operation in their hideout at Rikkos and Nassarawa in Jos Local Government Area of Plateau State and arrested 6 suspects. Items recovered, include 3 locally fabricated rifles, 5 mobile phones, 4 hammers, 5 cutlasses, 6 knives, and 1 fragmental jacket among others. All arrested suspects and recovered items were handed over to the relevant authority for further action.

“Furthermore, the air component of Operation WHIRL PUNCH continued the onslaught against terrorists, as an air interdiction operation was carried out on September 8, 2022, at an identified terrorist hideout at Gaude in Shiroro Local Government Area of Niger State. Intelligence reports confirmed that the location was usually used by the terrorists for planning their nefarious activities.

“It was further revealed that all the attacks around Shiroro were orchestrated from this location and consequently, the hideout was bombarded. Feedback, revealed that several terrorists were neutralized with others fleeing with various degrees of injuries. Also, 2 suspected gun runners en route from Onitsha to Abuja were arrested by personnel of the National Drug Law Enforcement Agency along Okene-Lokoja road in Kogi State.

“Items recovered from the suspects were 12 pump action guns and 374 cartridges. The arrested suspects and recovered items were handed over to the Nigerian Police for further action.”

In the North West zone, troops of Operation HADARIN DAJI were said to have continued to intensify offensive actions against terrorists and other criminal elements in their operational environment.

According to Danmadami, “On September 15, 2022, troops arrested two suspected terrorist collaborators at Access Bank, PZ Branch in Zaria Local Government Area of Kaduna State while trying to withdraw the sum of Fourteen Million Naira (14,000,000.00) deposited into the account of one Alhaji Abubakar a suspected terrorist financier. Troops also conducted operational activities in villages, communities and towns in Sokoto, Zamfara, Katsina and Kaduna State in the North West zone of the Country.

“During, the operations, troops neutralized 16 suspected terrorists and arrested 10 notorious terrorists at different locations in Chikun Local Government Area of Kaduna State. While, 5 AK47 rifles, 10 rounds of 7.62mm special, 17 mobile phones, 2 motorcycles, 3 locally made rifles, 3 pairs of woodland camouflage, 118 rustled sheep, 4 boafeng radios and N29,250.00 cash among other items were recovered, while 21 civilians were rescued. All recovered items, arrested terrorists and rescued civilians were handed over to relevant authorities for further action.

“Furthermore, the air component of Operation HADARIN DAJI on September 13, 2022, conducted an air interdiction operation at an identified terrorist hideout in Dutse Babare in Jibia Local Government Area of Katsina State. The air strike led to the neutralization of a terrorist leader identified as Ibrahim Dangawo and other members of his gang. A similar, operation was carried out at Gidan Guga in Faskari Local Government Area also in Katsina State, at an identified terrorist enclave.

“It was revealed that the terrorist group has been responsible for the kidnapping and robbing of people in that general area. Reports revealed that scores of terrorists were neutralized in the air attack.”

In the South-south zone, troops of Joint Task Force Operation DELTA SAFE theatre of operation have continued to sustain offensive actions against oil thieves and economic saboteurs through its kinetic operations towards denying the criminal elements freedom of action to create a conducive environment for economic activities in the Joint Operation Area to thrive.

“Troops also recovered 10 trucks, 1 generator, 1 tanker, 2 vehicles, 8 pumping machines, arrested 17 pipelines vandals while a total of Seven Thousand Eight Hundred and Five (7,805) Barrels of crude oil and Two Thousand Six Hundred and Thirteen (2,613) Barrels of Automotive Gas Oil were recovered.” General Danmadami said.
Chima Ugo is a patriotic Nigerian, a journalist, blogger and singer who is so much interested in the internet, journalism, and blogging and have been for half a decade.