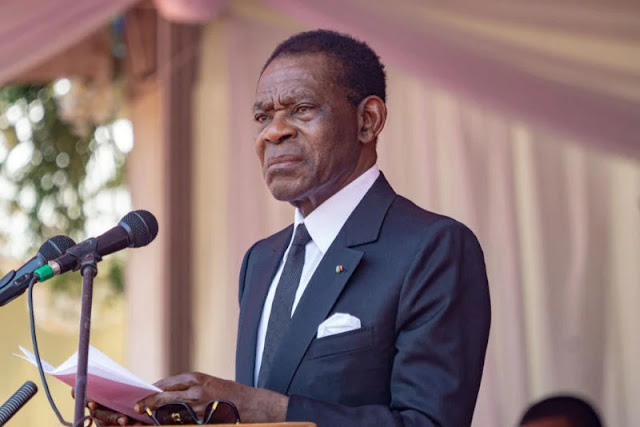 The vice president announced on Friday that President Teodoro Obiang Nguema Mbasogo, who has ruled Equatorial Guinea with an iron grip for more than 43 years, will run for a sixth term.
The longest-serving head of state in the world, aside from monarchs, is Obiang, who is 80. It is unclear whether he will run for office again or whether his son will take over.
Vice President Teodoro Nguema Obiang Mangue, also known as "Teodorin," his son, made the declaration.
“Because of his charisma, his leadership, and his political experience”, the ruling party unanimously chose Obiang as its candidate for the November 20 poll, Obiang Mangue wrote on Twitter.

The Democratic Party of Equatorial Guinea (PDGE) holds 99 of the 100 seats in the outgoing lower house of parliament and all 70 of the senate seats.

But it had not been clear who would be named as the party’s candidate on the presidential ballot.

No other candidate has so far been declared.

Obiang seized power in a coup in 1979 that led to the execution of his feared, ruthless uncle and predecessor Francisco Macias Nguema.

The PDGE was the country’s single legal political movement until 1991, when multi-party politics were introduced.

But Obiang himself has never officially been re-elected with less than 93 percent of the vote.

He could now be set for another seven years in power.

Last year, Teodorin seemed to have been lined up to stand in the elections. In the end, however, and to general surprise, he was not chosen as a candidate last November.

Observers and diplomats pointed to a power struggle between Teodorin and certain regime figures who did not want to see the president’s son taking over the reigns.

Teodorin has been sentenced in France to a three-year suspended prison term and a fine of 30 million euros for having fraudulently accumulated luxury properties and goods.

On Tuesday, the small, oil-rich country announced it was bringing forward the presidential vote by five months.

It also said the poll would take place at the same time as parliamentary elections.

Holding the two costly votes together was necessary at a time of economic crisis due to the Ukraine conflict and the pandemic, it said.

The country, one of the world’s most authoritarian, abolished the death penalty, state television announced on Monday citing a new law signed by the president.

International rights groups regularly accuse the authorities in the former Spanish colony of human rights abuses.
Chima Ugo is a patriotic Nigerian, a journalist, blogger and singer who is so much interested in the internet, journalism, and blogging and have been for half a decade.