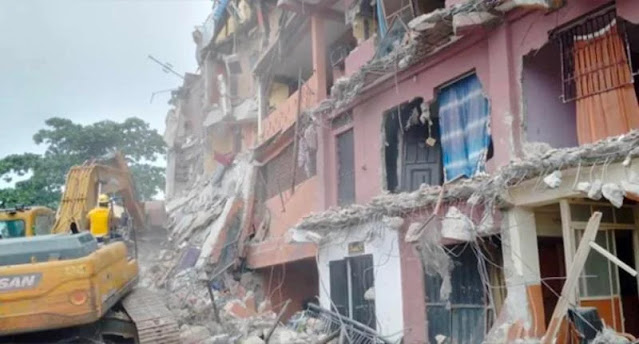 Yet another building collapse in Lagos has resulted in the confirmation of four fatalities.
On Friday afternoon, a three-story structure at Oye Sonuga Street, Off Oye Roundabout in Isolo Road, Mushin collapsed, trapping an unknown number of people.
The most recent information from Ibrahim Farinloye, the Lagos Territorial Coordinator of NEMA, indicates that two male and two female bodies had been removed from the building's rubble.
Around 7:45 p.m., Farinloye reported that search and rescue efforts had come to an end as emergency personnel had arrived at the scene.
He, however, said emergency workers will cart away the rubble and demolish the adjoining building which was affected on Saturday.

In an earlier update on the latest building collapse tragedy to hit Lagos, the Publicity Secretary of the Lagos State Emergency Management Agency, Dr Olufemi Oke-Osanyintolu, said those rescued alive have been taken to the hospital for treatment.

“After a painstaking search, one female has been rescued from the rubble. This brings the total rescued alive from the incident scene to three,” he said in an update at 7:15 pm.