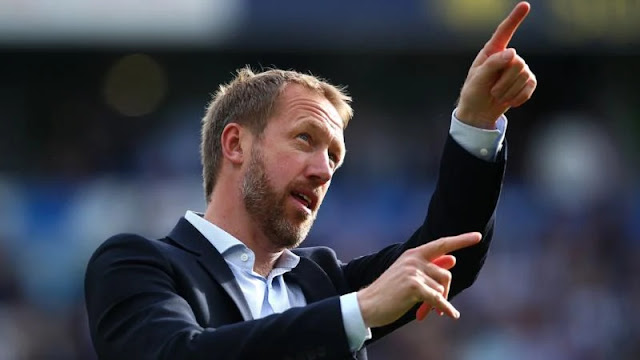 Since Thomas Tuchel was fired from his position as manager of Chelsea on Wednesday, Graham Potter has been frequently mentioned in connection with the position.
The Brighton manager has emerged as a front-runner to succeed Tuchel, according to The Athletic, who also reported that he will hold formal negotiations with Chelsea. Following the unexpected firing, a number of names have been floated, and a previous tweet from club great John Terry has some Blues supporters in favour of Potter taking over.
Last month, the formerly of Chelsea defender tweeted: "How brilliant is Graham Potter? I adore Brighton's style of play, and he has to be among the best young managers out there. Ticks every box for me.”
Potter could face competition from a number of high-profile names, with ex-Tottenham & Paris Saint-Germain boss Mauricio Pochettino also reportedly under consideration from Chelsea’s new ownership. Terry has been mooted as a potential candidate himself, having earned his coaching stripes as an assistant at Aston Villa between 2018 and 2021.

The Blues will look to appoint their next manager as soon as possible with some huge fixtures coming up. A west London derby is up next as they face Fulham on September 10, four days before their next Champions League outing against Red Bull Salzburg, while a heavyweight clash against Liverpool is also now looming large on the horizon.
Chima Ugo is a patriotic Nigerian, a journalist, blogger and singer who is so much interested in the internet, journalism, and blogging and have been for half a decade.