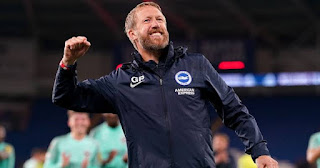 Graham Potter has verbally agreed to take over as manager of Chelsea following talks. Terms for the 47-year-transfer old's from Brighton have not been finalized, but Chelsea are confident of appointing him.

Chelsea made Potter their No. 1 target after firing Thomas Tuchel on Wednesday and quickly obtained permission from Brighton to speak with him. A significant compensation payment, estimated to be around £16 million, will be required. If everything goes as planned, Potter will be available for Saturday's game against Fulham.

Potter was at Brighton's training ground on Thursday, but talks with the former stersund and Swansea manager will continue later in the day. He led the Swedish club to the top flight and into the Europa League, and he and Brighton finished ninth in the Premier League last season.

Kjetil Knutsen, the manager of Bod/Glimt, is one of the managers being considered by Brighton. He has led the club to its first Norwegian titles and a second consecutive season in the Europa League group stage.