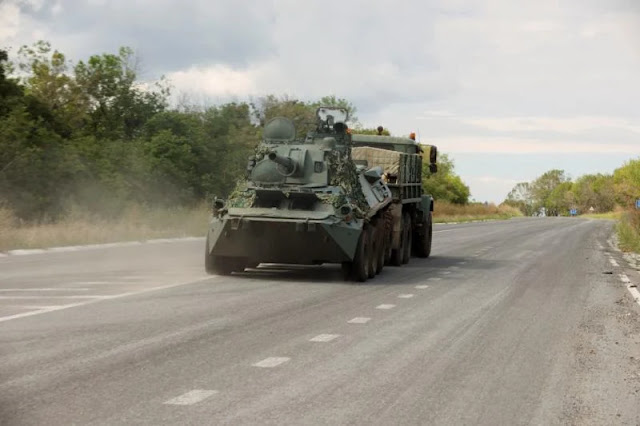 The International Atomic Energy Agency (IAEA) ordered on Tuesday that combat end in a security area surrounding Europe's largest nuclear power plant after its specialists discovered significant damage there. The plant is located near the front of the Ukraine war, according to the IAEA.
The Zaporozhzhia nuclear power station, which Russia and Ukraine both claim the other shelled, was not given credit in a long-awaited study. But it warned that a catastrophe was possible if the shooting didn't stop.
The plant is commanded by Russian military but is operated by Ukrainian specialists. Russia seized the plant quickly after invading Ukraine. It is located on a bank of a sizable reservoir that is held by Russia and faces Ukrainian fortifications across the water.
“While the ongoing shelling has not yet triggered a nuclear emergency, it continues to represent a constant threat to nuclear safety and security with potential impact on critical safety functions that may lead to radiological consequences with great safety significance,” the IAEA wrote.

“The IAEA recommends that shelling on site and in its vicinity should be stopped immediately to avoid any further damages to the plant and associated facilities, for the safety of the operating staff and to maintain the physical integrity to support safe and secure operation. This requires agreement by all relevant parties to the establishment of a nuclear safety and security protection zone.”

Inspectors said they had found Russian troops and equipment at the plant, including military vehicles parked in turbine halls. Moscow has denied accusations that it used the plant as a shield for its forces, but says it has troops guarding it.

“Ukrainian staff operating the plant under Russian military occupation are under constant high stress and pressure, especially with the limited staff available,” the IAEA report said. “This is not sustainable and could lead to increased human error with implications for nuclear safety.”

IAEA inspectors led by the agency’s chief, Rafael Grossi, braved shelling to cross the front line and reach Zaporozhzhia last week. Two experts have stayed on to maintain a long-term presence at the site.

Earlier on Tuesday, blasts rang out and power was cut in the city surrounding the plant, Enerhodar, according to Dmytro Orlov, the Ukrainian mayor who operates from outside Russian-held territory. Moscow repeated its longstanding accusations that Ukrainian forces had been shelling the plant.

Kyiv says it is Russia that has been staging such incidents, to undermine international support for Ukraine and as a possible pretext to cut the plant from the Ukrainian power grid and steal its output. Russia has so far spurned international pleas to pull its forces back from the site and demilitarise the area.

The IAEA report listed areas of the plant that had been damaged, including a building housing nuclear fuel, a facility for storing radioactive waste, and a building housing an alarm system. It said the power station had been cut off several times from offsite power supplies critical to safe operation, and called for an end to all military activity that might interrupt power.

A Russian all-terrain armoured vehicle is parked outside the Zaporizhzhia Nuclear Power Plant during the visit of the International Atomic Energy Agency (IAEA) expert mission in the course of Ukraine-Russia conflict outside Enerhodar in the Zaporizhzhia region, Ukraine, September 1, 2022. REUTERS/Alexander Ermochenko

Grossi is expected to brief the U.N. Security Council in New York on his findings later on Tuesday.

Ukrainian President Volodymyr Zelenskiy on Monday warned of a near “radiation catastrophe” at the plant and said Russia’s shelling of it showed Moscow “does not care what the IAEA will say”.

Russia’s diplomatic mission in Vienna, where the IAEA is based, said Ukrainian shells had landed near the plant’s fuel storage unit, solid radioactive waste storage and near one of the power units. It published images of shell impacts to back its assertion. Reuters could not verify either side’s claims.

Thousands of people have died and millions have fled Ukraine since Russia launched what it calls a special military operation in February saying it aimed to demilitarise its neighbour. Kyiv and the West call it a brazen war of conquest.

The past week has seen the focus of fighting shift to the south, where Ukraine has started a long-awaited counter-attack to recapture territory seized early in the war.

Little information has emerged about the progress of that campaign, with Kyiv barring journalists from the frontline and releasing only limited reports, to preserve surprise.

Russia says it has repelled the assault. Western military experts say Ukraine’s aim appears to be to trap thousands of Russian troops on the west bank of the wide Dnipro River and cut them off by destroying their rear supply lines.

Meanwhile, Russia continued to bombard Ukrainian cities elsewhere. Rescue workers found the body of a woman beneath the rubble of an apartment building in Kharkiv after overnight shelling of Ukraine’s second-biggest city, mayor Ihor Terekhov said. The governor said two others were also killed in the province. read more

“There’s a big fire at the oil depot. Fire services are working at the site. We’re working to establish the scale of destruction and information about casualties,” Valentyn Reznychenko, a local regional official, said.

Fears in Europe have increased over a potentially bleak winter after Russia announced it was keeping its main gas pipeline to Germany shut, citing disruption to equipment maintenance caused by Western sanctions.

Siemens said it did not understand Gazprom’s representation of the situation.
Chima Ugo is a patriotic Nigerian, a journalist, blogger and singer who is so much interested in the internet, journalism, and blogging and have been for half a decade.