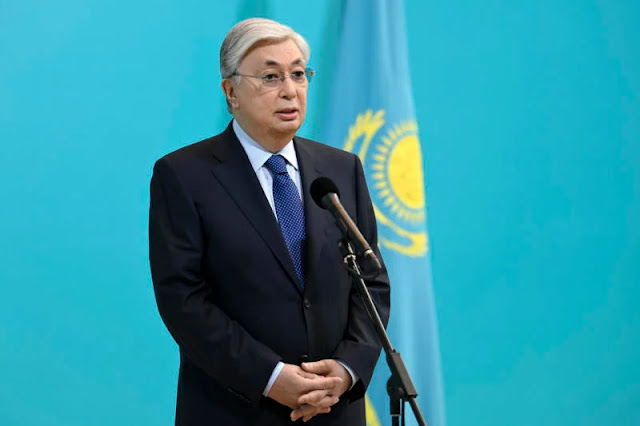 Kassym-Jomart Tokayev, the president of Kazakhstan, has suggested holding an early election this fall and changing the current two five-year terms of the office to one seven-year term.
Tokayev announced his intention to run for a second term in a speech to the parliament on Thursday. He also suggested conducting early elections for the legislature in 2023.
“I propose that we hold early presidential elections in the autumn of 2022,” Tokayev said, saying measures were needed to “strengthen our statehood” and “maintain the momentum of reforms” after the Central Asian country underwent a political crisis in January that left 225 people dead.

“A new trust mandate of the people is needed for the successful implementation of fundamental and comprehensive reforms on the way to creating a fair Kazakhstan,” Tokayev said.

Kazakhstan will hold presidential elections in 2024 and parliamentary elections in 2025.
After the June referendum that successfully decentralised decision-making and stripped former President Nursultan Nazarbayev of his "national leader" position, Tokayev declared that he would move the parliamentary vote forward.
According to Tokayev, as a result of the revisions, the nation has now established "totally new norms for a political system with fair and open rules of the game."
He stated that the present two five-year mandates of the presidency would be reduced to only one seven-year term.
January’s unrest roiled energy-rich Kazakhstan, one of the most stable of the Central Asian countries that gained independence with the 1991 collapse of the Soviet Union.

Kazakh authorities detained about 12,000 people for their alleged participation in anti-government protests.

Nazarbayev ruled the country for 29 years after it gained independence. In 2019, he stepped down and hand-picked Tokayev as his successor.

Should he win the vote, the upcoming election would strengthen Tokayev’s mandate as an independent leader.

In moves certain to boost public support, Tokayev announced a 17 percent minimum wage increase on Thursday and plans to allocate half of the National Fund investment income to personal accounts of those below 18 which they will be able to use to pay for tuition or to buy homes.
Chima Ugo is a patriotic Nigerian, a journalist, blogger and singer who is so much interested in the internet, journalism, and blogging and have been for half a decade.