Methodist bishop: Whoever God appoints in 2023 must provide basic necessities 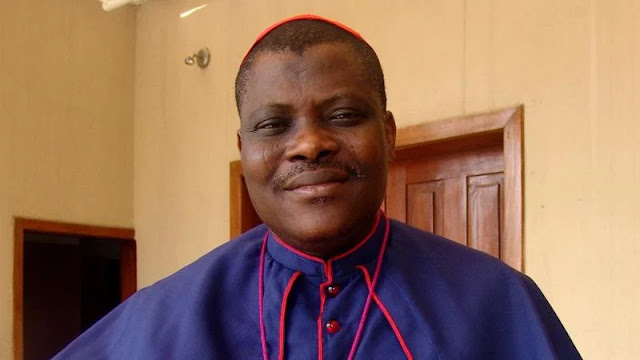 The Bishop, Metropolitan Diocese of Ikeja, Rt. Rev. Stephen Adegbite, weekend, said that whoever God appoints in 2023 to lead Nigeria must fear God and provide the basic necessities of life for people.
This occurred at the same time that the Church presented late Rear Admiral Ndubisi Kanu, a former military administrator of the states of Lagos and Imo, with a posthumous award in honour of his excellent service and contribution to the expansion and development of the diocese.
Speaking to the media at the 5th Diocesan Harvest and Anniversary Thanksgiving and Conferment of Awards Service, which had the theme "Harvest of God's Faithfulness" and was held at the Methodist Cathedral of Peace and Excellence, Opebi, Ikeja, Adegbite said that Kanu had been like a father to him ever since he first met him and his wife in 1996.
His words: “We are not going to declare for any candidate, we are not going to tell people who to vote, if we do that then we don’t know what we are doing. The church is not in partisan politics, the church is a father to the nation and anyone that emerges as president of Nigeria would be supported by the church.

“Nobody should capitalize on the church to canvass for vote, it is only God that knows who is serving him. Whoever God appoints to be our leader in 2023, must fear God and be able to provide the basic necessity of life for the people. Good governance is what we are asking for, I just came from Germany, we see what people are doing we can do better. I was in Doha Airport and I was asking, the people that built this airport are from heaven? What kind of airport do you put for us in Muritala Airport? Even the new one they said they have built is nothing.

“You need to travel out and see what others have done. They don’t have two heads. Money that they have, we have more. I beg our leaders, for once, let us be reasonable people, let us leave something good for our children. Let us plan for our children and our children’s children. I beg all of you, do something for this nation.

“Posterity will vindicate you but if you continue the way you are going, if care is not taken, people will stone you. It cost us nothing to be good. God has provided us with all that we need. Why can’t we get a better service from you?

“You are canvassing for a vote and people are seeing you after you win the election nobody will see you again. Whoever comes in 2023, we will see you by force, we will come after you, we will be talking to the press, and we will not leave you.

“If there are some promises you can’t do better don’t promise them but anyone you promise we will follow you up and ensure that you do it because you are the voice of the voiceless. If we fail to be good God will punish us,” he said.

“Late Kanu was a very good friend of mine. Though the age difference was so much the man and the wife decided to adopt me as one of their children and that has been the relationship for the last 26 years. We met in 1996 in Tinubu church and since that time it has not changed.

“I moved here, they moved with me and that is why today because of the support they have given to the diocese we are recognizing what he has done to the Lord and more that they will still do.

“My own belief is that anywhere you come from, once you are a child of God you are my brother, you are my sister and we can continue to move together. So my relationship with him has been wonderful.”

He described the deceased as a simple, unassuming, forthright and dogged man.

He said: “Those are the traits and characters that I know I also have. He was someone that fought for democracy, and human rights and I believe in justice, fair play, and equity and those are the things he stood for while on earth and those legacies we are going to keep alive by the grace of God.”

On her part, the wife of late Kanu, Gladys Kanu, said: “We’ve known the bishop for 26 years and we have been part of the church. So, I am very happy that everything is going well in the diocese. My husband contributed a lot to this diocese and organisations, including NADECO and the Ohanaeze Ndigbo. So, this award is a recognition of his contributions and we are happy for this. It’s a big recognition.
Chima Ugo is a patriotic Nigerian, a journalist, blogger and singer who is so much interested in the internet, journalism, and blogging and have been for half a decade.