MUSLIM-MUSLIM TICKET: CAN Speaks Out Strongly That No Agreement With Tinubu 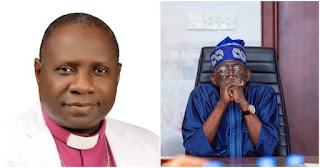 The Christian Association of Nigeria spoke out strongly against the All Progressives Congress' Muslim-Muslim presidential ticket on Monday, stating that its opposition to the ticket had not changed.

It also stated that no agreement had been reached with APC presidential candidate Bola Tinubu.

On Monday, it was reported that Tinubu met with the CAN leadership to discuss the controversy surrounding the party's choice of a Muslim-Muslim ticket for the 2023 general elections.

Tinubu chose Kashim Shettima, a former governor of Borno State, as his running mate, which infuriated the country's Christian population.

Debunking the report of Tinubu's agreement with CAN, the Christian body said in a statement on Monday that it had not changed its stance on the contentious Muslim-Muslim ticket.

The statement was signed by the association's Special Assistant on Media, Luminous Jannamike, and was titled, 'Muslim-Muslim Ticket: CAN Maintains Its Position.'

The association also warned Tinubu's attendance and donation at the 70th birthday celebration of Catholic Bishop of Sokoto, Most Rev. Matthew Hassan Kukah, last week should not be interpreted as a financial inducement bribe to appease the Christian community.

"The attention of the leadership of the Christian Association of Nigeria has been drawn to a media report titled, 'How Tinubu met, resolved Muslim-Muslim ticket with CAN,' which claimed that the apex Christian body had changed its position regarding the same faith ticket," the statement read in part.

"To put it mildly, the story is ridiculous, malicious, and untrue, and it should be ignored in its entirety by all reasonable members of society," the statement continued.

"For the record, under the leadership of Rev. Dr Samson Ayokunle, its immediate past national president, CAN took a stand against the same faith ticket imbroglio, and His Eminence Archbishop Daniel Okoh stands on that same position," the statement concluded.