Nyesom Wike: I did more for Alabo TOG than Rotimi Amaechi 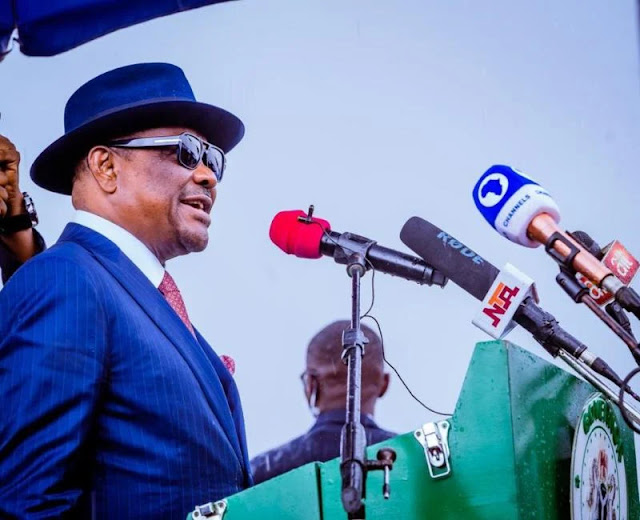 On Monday, Rivers State Governor Nyesom Wike retaliated against former Transportation Minister Rotimi Amaechi for criticising him for showing disrespect to the late Alabo T. O. Graham-Douglas (TOG), a four-time federal minister, who was buried on Saturday in Abonnema, Akuku-Toru Local Government Area.
In his goodwill message, Amaechi stated that Alabo TOG deserved all the attention from the Rivers government, including a state burial. However, the Rivers governor chose to skip Alabo TOG's funeral in favour of a Port Harcourt event to welcome defectors from opposition political parties to the Peoples Democratic Party (PDP).
Responding during the inauguration of another remodelled state government property in Port Harcourt, Wike told his predecessor that he and his administration honoured Alabo TOG during his lifetime, alleging Amaechi never did.

In a wordy reply to Amechi, Wike said, “I tell people, let’s live in peace. So many people think if they don’t talk about us, they won’t survive. People like to use the life and death of our prominent people to play politics.

“If you go for burial to honour a man who has died, you honour the man, and not use his death to play politics. I’m very disappointed that the former Minister of Transport, Amaechi, will still come to this state to talk about this government of not giving late Alabo Graham-Douglas a state burial.

“It’s unfortunate. I asked him when Alabo was sick, where were you? This state government committed so much money to make sure Alabo survives. I challenge anybody. We did not spend less than N50Million to make sure our elder statesmen survived.

“It is his survival we want. We wanted him to be alive. When the late son had an accident and was flown to London, this same (Rivers) government, took the cost, go and ask people. We couldn’t have said all these, but when people come to talk in the public, we like to go and eulogise the dead.

“Amaechi let me ask you when Alabo was alive, he told you to honour him by elevating the stool of Amanayabo, you did not do it. I came and elevated the stool to First Class. Amaechi, Alabo told you, please help and do the Ring Road in Abonnema, so we will not be having the challenge that if we have occasion, everybody will be trapped on one road. To show your love for the man, he (Amaechi) refused to do it. I did it.

“When alive, Alabo told Amaechi, now that I’m alive, why not do the Trans Kalabari Road? You didn’t do it. I’m the one doing it. So who is the man who loves Alabo? Because the man in death, I know why you went there because you have an interest. The only way you can love the man is to go there when he has died. When he was alive, do these things so he would be happy, you didn’t do it.

“That was how before Justice Karibe-Whyte died, you went and pulled down our General Hospital, that you were going to build a 1000 bed Karibe-Whyte Hospital. Karibe-Whyte died, he never saw one block you laid. But when he died you went there to say oh, Kalabari people, there is so much insecurity here. That is how you eulogise people.

“Capt Elechi Amadi died, in fact, before he died, you said you were going to built the Faculty Humanities. You tried to lay blocks. You abandoned it, I came and completed that building, even though everybody knows you have an interest in his family. That is the kind of life you live.

“When Elechi Amadi died, there was no road to his home, for a man you profess to love. I came and sent MCC to do that road. It was done, that was how Capt Elechi Amadi was buried. So you should be ashamed of yourself.

“Instead of you to come to say, our late elder has died, may his soul rest in peace, you come and open your mouth to talk politics in this state. I thought some people should know there is a limitation to everything. If you did not say what you said on Saturday, I wouldn’t have exposed you now. People didn’t know you have an interest everywhere.

“Must you have interest in every man you say is your friend? Some people should be quiet. We have taken all your people. Nobody in your party again because of your poor leadership. Why not manage and stay?

“Seven years as Minister of Transportation, what did you do for your people? Tell Rivers people. All you were interested in is doing business with CCECC, standard gauge, and whatever gauge, up till now, no gauge, we have not seen anyone from Port Harcourt to Maiduguri.

“As a junior minister, I brought Law Faculty to Uniport, brought oil and gas polytechnic to Bonny. I gave grants to Kenule Polytechnic and Ignatius Ajuru University. I renovated most secondary schools in Rivers. Tell us, as a Grade A Minister, what you brought. Do you think you can deceive Rivers state again?

“This should be your last time to open your mouth to talk about this state because you are a total failure as far as this state is concerned. Even what is supposed to come to us you blocked it. You thought you won’t finish as a minister, you have left.”

Wike on called on Access Bank’s, MD/CEO, Herbert Wigwe and other buoyant Rivers-born investors to enjoy the right of first refusal to buy some of the remodelled property of Rivers State Government up for sale.
Chima Ugo is a patriotic Nigerian, a journalist, blogger and singer who is so much interested in the internet, journalism, and blogging and have been for half a decade.