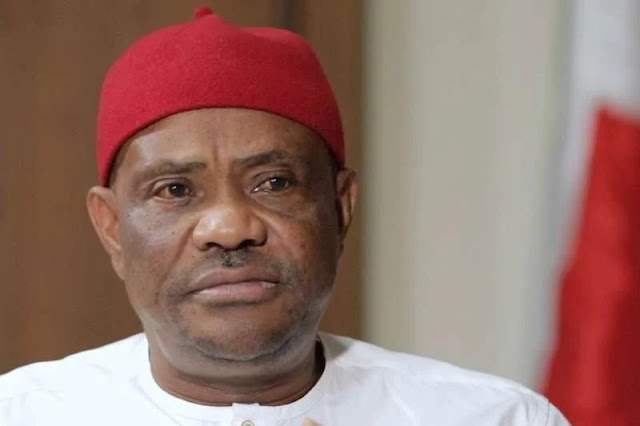 On Friday, Governor Nyesom Wike discussed the costs associated with not receiving the Peoples Democratic Party (PDP) presidential nomination.
Sen. Iyorcha Ayu, the PDP National Chairman, was also accused of corruption by Wike during a no-holds-barred press conference at the Government House in Port Harcourt. Wike claimed that Ayu had received an inducement of N1 billion in Lagos in order to sabotage the party's primary election process in May. He also claimed that Ayu wanted to keep his position in order to advance his career as Secretary to the Government of the Federation.
The Rivers governor maintained his and allies’ insistence on remaining in the party to force the resignation of Ayu in the interest of fairness and equity, expressing hope that the party, in the end, could do the needful going into next year’s election divided spells doom for PDP.

Reminded on pressures within the party to suspend him for perceived anti-party conduct in his hard stand and romance with opposition can candidates, Wike said, “We cannot allow this opportunity that Nigerians have given to us to go. If we miss it, we will pay dearly. If the party so wish to suspend me they should go ahead. In fact, I dare them to suspend me. They know what I can do.

“Who will suspend me? What do you think is my job here? I’m not saying I’m bigger than the party but those who ran away from the party cannot suspend me from the party. I beg them, today, today, they should come and suspend me. Anything they see, they will take.

“Opposition parties and candidates talking to me is not anti-party. Something must give way for us to move ahead. We are not talking about the removal of Ayu. Resignation is not removal. For political expediency, he should resign to salvage the situation and the party.”

On perceived Ayu’s compromise in the presidential primary and failure to keep their promise to resign, Wike said, “Nobody forced Ayu that if the candidate comes from the North he will resign. He knows it’s the practice.

“Ayu is very corrupt. He is very corrupt. Will he deny he did not collect N1Bn. He met one of the presidential aspirants in Lagos. Let him deny this then I will say more. I am serious and an important Governor. I challenge him to deny it.”

He noted the entire presidential primary election of his party was compromised against him, adding that people were forced to step down in favour of Atiku.

He said: “The national chairman threatened that if Wike wins that he would resign. He was asking aspirants to resign for Alhaji Atiku Abubakar. They held a lot of meetings. Even at the primary that was the reason we started very late. They were putting pressure that aspirants should step down for Atiku.”

On seeming backstabbing by estranged Sokoto counterpart, Governor Aminu Tambuwal, Wike said he is not shaken because he has a shock absorber to deal with the situation, just as he expressed disappointment at convention planning committee head, Sen David Mark, for his perceived role in the betrayal by Tambuwal to skew votes in favour of Atiku.

Wike said, “If you are a politician, you must develop a strong shock absorber, otherwise you will die. I have a shock absorber. If Tambuwal betrayed me, nothing I can do about it. I don’t think about that anymore. Were we married? If he thinks what he has done is good in his conscience, it’s his choice.

“I’m satisfied with what I have done as Governor of Rivers state. That’s what makes you a Nigerian. I’m not one of those who will go and stay in Abuja. As governor, I’ve never spent a night in Abuja. What I’m I staying there for? After office, I will still remain in Rivers state.”

Wike said he had the will to disrupt the presidential primary on the field when the oddities were playing out and even after, but that he respected Nigerians who were watching with high hope for the PDP to take over the federal government and he wouldn’t want the party to implode and lose the opportunity being presented by Nigerians to PDP to rescue Nigeria.
Chima Ugo is a patriotic Nigerian, a journalist, blogger and singer who is so much interested in the internet, journalism, and blogging and have been for half a decade.