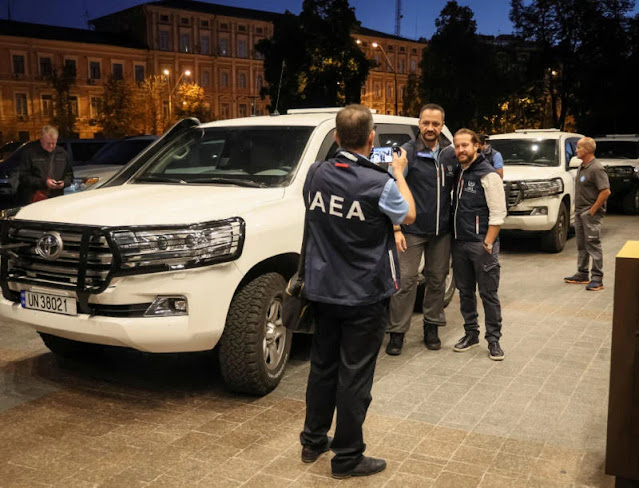 Following reports of new shelling earlier in the day, Ukraine claimed that a UN team on its way to assess the Russian-controlled Zaporizhzhia nuclear power station on Thursday was stranded at a checkpoint approximately 20 kilometres (12.4 miles) from the front line.
Despite hours of delays, the head of the UN's nuclear watchdog, the International Atomic Energy Agency (IAEA), was determined to arrive to Europe's largest nuclear power plant on Thursday, a spokesperson told Reuters.
The truck was waiting at a Ukrainian checkpoint for the situation around the facility to become safe before moving on, according to Reuters and the state nuclear company of Ukraine, Energoatom.
The Zaporizhzhia nuclear plant, which was occupied by Russia in March, has come under frequent shelling over the past month, with Kyiv and Moscow trading blame over the strikes and fuelling fears of a radiation disaster.

The IAEA spokesperson told Reuters around 12:00 local time (0900 GMT) that the mission, headed by IAEA chief Rafael Grossi, had been delayed on the Ukrainian-controlled side for three hours.

“Director General Grossi has personally negotiated with Ukrainian military authorities to be able to proceed and he remains determined that this important mission reaches the (Zaporizhzhia plant) today,” the spokesperson said.
Chima Ugo is a patriotic Nigerian, a journalist, blogger and singer who is so much interested in the internet, journalism, and blogging and have been for half a decade.