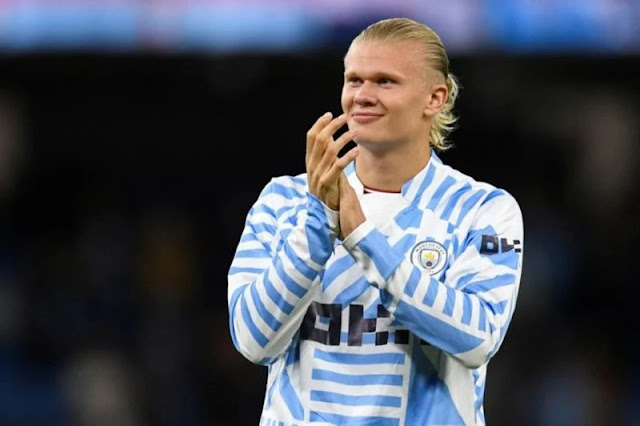 After Erling Haaland's second consecutive hat-trick on Wednesday helped Manchester City defeat Nottingham Forest 6-0, Pep Guardiola challenged the Norwegian striker to go down in history as a Manchester City icon.
Just four days after scoring three goals against Crystal Palace, Haaland destroyed Forest with a quick-fire treble in the first half at the Etihad Stadium. The 22-year-old broke a record previously held by former City legends Sergio Aguero and Micky Quinn by becoming the only player in the Premier League history to score nine goals in his first five league outings.
Although Haaland still has a long way to go before catching City's all-time leading scorer Sergio Aguero, Guardiola is optimistic that the Borussia Dortmund player can cement his name in the club's legacy.
“Sergio is the legend. Nobody can break the position in the hearts of City fans, scoring the most important goal in the modern history,” Guardiola said. “Erling has the quality to be there. It’s not about him or Sergio. What Sergio has done is amazing. But Erling has this talent. When City bought Erling, everybody talked about what he has done in the past. What we wanted to do is help him. Hopefully he can enjoy and score more goals. What he has done in Norway, Austria and Germany he tries to do here. He’s talented, we knew it.”

Haaland is already the firm favourite to finish as this season’s Premier League top scorer. But Guardiola insists helping champions City retain the title would mean more to his striker than any personal accolades.

“I think what we want is win the titles. If the record and the goals help to win it will be perfect,” he said. “Knowing him a little bit, I don’t know if he’d be happy breaking records if we didn’t win titles. I think he wants to be part of that. The better we play, he’ll have more chances to score goals.”
Chima Ugo is a patriotic Nigerian, a journalist, blogger and singer who is so much interested in the internet, journalism, and blogging and have been for half a decade.