Protests in Indonesia as anger grows over fuel price hike 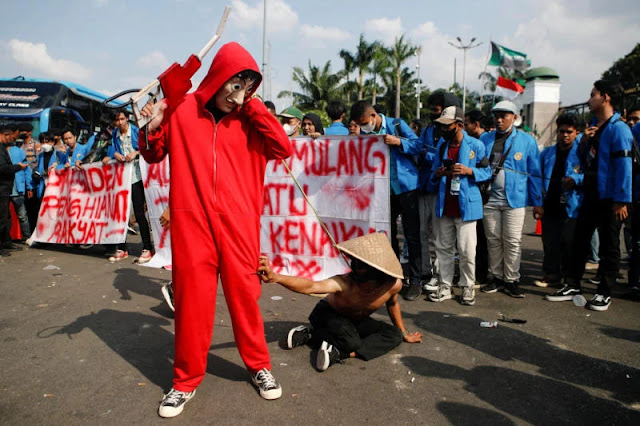 In response to surging inflation, thousands of protestors have gathered in Indonesia's largest cities in an effort to put pressure on the government to rescind the nation's first subsidised fuel price increase in eight years.
As part of a series of protests organised by students and labour unions that police say could draw tens of thousands of people out into the streets this week, demonstrations were taking place on Tuesday in and around the capital city of Jakarta as well as in the cities of Surabaya, Makassar, Kendari, Aceh, and Yogyakarta.
“Workers are really, really suffering right now,” Abdul Aris, a union official, said on Tuesday.

“The price shouldn’t have been raised,” he said, promising to keep fighting until the government gives way.

Indonesian President Joko Widodo said he had little choice when he announced on Saturday an increase in subsidised fuel prices by about 30 percent, an unpopular move in the country of 270 million people.

Oil prices are now about 32 percent higher than a year ago.

Small rallies took place at the weekend and again on Monday, with tyres burned and some roads blocked as students and workers vented anger over the decision, which came amid rising food costs and an economy still reeling from the effects of the pandemic.

The government has subsidised fuel for decades in Indonesia.

Past increases in the price of fuel and other goods have triggered student protests and in 1998, price hikes led to mass riots that helped topple longtime dictator Suharto.

Thousands of police were deployed across Jakarta on Tuesday, many guarding petrol stations, fearing those sites could become targets of mounting anger over the price increase that unions say will hurt workers and the urban poor the most.

Endra Zulpan, a Jakarta police spokesperson, said that nearly 7,000 officers had been deployed in and around the capital ahead of the protests.

The national police chief had instructed regional authorities on Monday to maintain calm by increasing efforts to explain to the public why the fuel hike was necessary.

In Jakarta, thousands rallied wearing red or orange bandanas, marching and chanting slogans denouncing the government’s move and calling for an increase in the minimum wage.

There were no reports of violence or arrests at the peaceful protests.

Members of trade unions, farmers, fishermen, temporary teachers and domestic workers protested in front of the parliament building in the capital, and provincial governors’ offices, against the fuel price increase.

The hike – the first in eight years – raised the price of gasoline from about 51 cents to 67 cents per litre and diesel fuel from 35 cents to 46 cents.

In Makassar, the capital of South Sulawesi province, dozens of students who rallied on Monday and Tuesday said the increase will burden especially the most vulnerable who have not fully recovered from the effects of the COVID-19 pandemic.

Subsidised fuel is a politically sensitive issue in Indonesia, but the government has worked hard to soften the blow by rolling out a series of compensation measures, including direct cash transfers.

The price increase will have major implications for households and small businesses, as subsidised fuel accounts for more than 80 percent of state-owned oil giant Pertamina’s sales.

The last fuel price increase was made in 2014, months after Jokowi took office, sparking protests across the archipelago.

The president said on Saturday that increasing prices was his last option, due to fiscal pressure building as the country’s energy subsidy had tripled this year to 502 trillion rupiah ($34bn) from its original budget, triggered by rising global prices of oil and gas.

“The government has tried its best as I really want fuel prices to remain affordable,” Widodo told a televised address announcing the fuel hike.

“The government has to make decisions in difficult situations.”

He also said that the flow of subsidies to the public was not well targeted – about 70 percent of subsidies were benefitting middle and upper classes – and the government decided instead to increase social assistance.