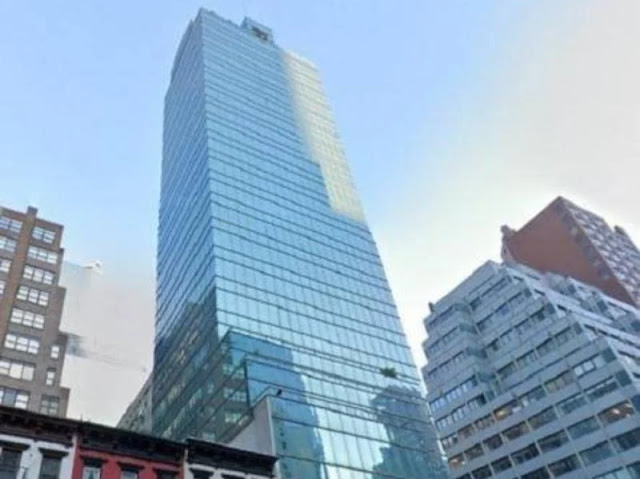 According to a study by the office of the Auditor-General of the Federation, the 22-story Nigeria House in New York, United States, is rapidly deteriorating.
The building is one of several properties in Nigeria that are in a condition of degradation, according to the report being evaluated by the House of Representatives Committee on Public Account.
The report stated that €226,393 was spent on re-roofing the nation's mission in The Hague, Netherlands, despite the fact that it did not specify how much would be required to repair Nigeria House.
In New York, on Second Avenue, Nigeria House is a short distance from the UN building. It houses the National Boundary Commission of Nigeria, the General Consulate of Nigeria, and the National Intelligence Agency (NIA).
Other from the New York building, the properties are used as the residences and offices of the Nigerian diplomatic missions abroad.
The report also stated that Nigeria's Embassy in Berlin, Germany spends an average of €50,000 (N8,750,000.00) annually on utilities and the security of a different building in Bonn that it departed in 2001.
When the Mission was in Germany, the Bonn property served as the home of Nigeria's ambassador (Bonn). The facility has remained vacant and is rapidly degrading since the mission was moved to Berlin.
The Office of the Auditor which suggested urgent repair of the occupied buildings and outright sale of the unoccupied ones disclosed that the Bonn Municipal Council had threatened to “ de-classify the unoccupied building from diplomatic status.”

It warned that “if this is allowed to happen, the property will attract other charges which the Embassy at Berlin must pay from its lean resources. Recently, attempts were made by illegal squatters to break into the house.”

The report reads in part: “The Nigerian Permanent Mission to the United Nations, New York is housed at the Nigerian House which is situated at No. 828, Second Avenue, New York, USA. This building is a 22-story building and it also houses the Nigerian Consulate-General, The National Boundary Commission of Nigeria, and the National Intelligence Agency (NIA).

“The property, which is strategically located, just a few blocks to United Nations Headquarters, is grossly under-utilised.

The Office of the Auditor-General advised that since the New York edifice is “strategically located, deteriorating and underutilised,” it should, as a matter of urgency, be comprehensively rehabilitated before it constitutes an embarrassment to Nigeria.

“After rehabilitation, the un-utilised space (of the Nigeria House) could be put up for rent. This will keep the property in good shape and also generate revenue to the Federal Government, especially now that the sources of government revenue are fast dwindling.”

On the Nigerian embassy in Berlin, the report said: “The Embassy has a property in Bonn which was used as the residence of the Ambassador when the Mission was there. Since the relocation of the Mission to Berlin, the property remains unoccupied and is fast deteriorating. Furthermore, the Embassy is incurring huge bills, on an average of €50,000.00 (N8,750,000.00) annually on utility bills and additional expenses to secure the property.

“If the Embassy cannot find an alternative use for the property, it should either be disposed off or leased to generate revenue for the government instead of allowing it to deteriorate and at the same time wastefully expending huge sums on it.

“The Embassy of Nigeria, Berlin, Germany, expended the sum of €66.5 million (N11,637,500,000.00) on rent of accommodation for home-based staff members in the year 2010. This amount is rather on the high side and in view of the economic reality the nation is facing, this trend cannot be sustained.

“In view of this, the government should explore the outright purchase of properties. Alternatively, a mortgage should be considered subject to the availability of funds. This will put an end to the annual expenditure of this huge amount of €66.5 million (N11,637,500,000.00) on rent of residential accommodation.”

“Furthermore, the property at Bonn is fast deteriorating without any attention given to it by the government. Meanwhile, the Embassy is expending massively on the payment of utility bills at that property. We have opined that this property at Bonn be disposed of or rented out to generate revenue and save it from further deterioration or total collapse.

“Even though the Embassy did not expend on this subhead as evidenced by the 2012 and 2013 Vote Book balances, there was no evidence to show that the balance of N31,264,762.09 was returned to the chest at the close of the financial years 2012 and 2013. It was in error to appropriate funds for the payment of rent of office when the Embassy was occupying a government-owned property. This arbitrary appropriation to subheads that were not needed could be the reason why missions over expend on some subheads”.

Similarly, the Auditor-General Office indicted the Nigerian embassy in The Hague, Netherland for paying about €226,393.345 to two different contractors for the construction and repair of the roof of the Chancery and €66,730 on the renovation of six government-owned properties.

The report also noted that the staff strength of the Nigeria High Commission in the United Kingdom was over-bloated, especially by local staff members, adding that in most cases, there was arbitrary and discretionary engagement, deployment, and placement of such officials.

Local staff members are U.K based Nigerians working in the High Commission.

It said further said: “There was a general lack of standard and uniformity in the conditions of service of the local staff, most of whom are Nigerians living in the UK. It was noted that an average sum of £226,974.8 was spent monthly on the remuneration of the local staff, compared to the £74,108.38 spent on the home-based officers Some of the local staff could not clearly define their work schedules”

It added that the Embassy in Berlin spent N32.32 million to maintain the residence of a former Ambassador in Valkanstrasse in 2014 and part of 2015, even when the property has remained unoccupied since the Embassy relocated to Berlin in 2001.

According to the report, the “Consulate is deeply indebted to several creditors, some of whom have taken the office to court to seek redress.”

“From available records, €783,809.66 was owed by the mission as of August 19, 2016.It was observed that the rent of the Chancery and officers’ residential quarters had increased to €88,206.60 and €10,854.00 respectively as of October 17, 2016.
Chima Ugo is a patriotic Nigerian, a journalist, blogger and singer who is so much interested in the internet, journalism, and blogging and have been for half a decade.