Russia excludes some IT professionals, bankers and journalists from mobilisation 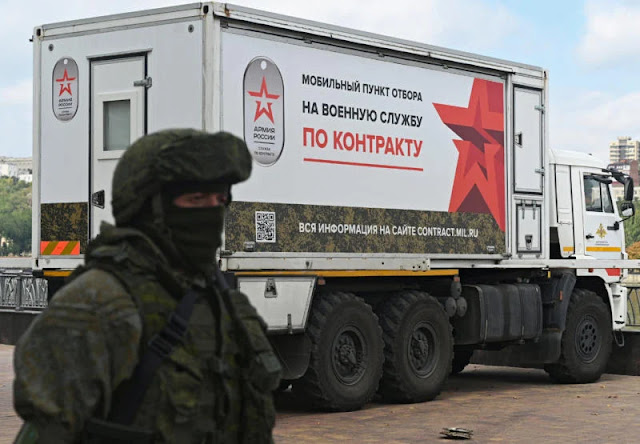 On Friday, Russia announced that certain bankers, IT professionals, and journalists would not be required to enlist in the military to serve in Ukraine as part of President Vladimir Putin's mobilisation.
In what the Kremlin refers to as a "partial mobilisation," Russian Defense Minister Sergei Shoigu stated on Wednesday that Russia would attempt to call up 300,000 more troops for its war in Ukraine.
According to Kremlin spokesman Dmitry Peskov, the section of the official decree notifying mobilisation that contained the number of people who would be drafted was kept secret and unreported.
Russia’s defence ministry said some employees working in critically important industries would be excluded from the draft in a bid to “ensure the work of specific high-tech industries, as well as Russia’s financial system”.

The exceptions apply to some IT workers, telecommunications workers, finance professionals, as well as some employees at “systemically-important” mass media outlets and interdependent suppliers including registered media and broadcasters.

Russia classifies major employers and core companies in set industries as “syetemically-important” if they meet certain thresholds in terms of headcount, revenue or annual tax payments.

The classification allows firms to get special benefits from the Kremlin such as government-backed loans, bailouts and state investment, most recently during the COVID-19 pandemic.

Among the media outlets previously classified as such are a host of state-run TV channels, radio stations, news agencies, and newspapers, as well as some of Russia’s few privately-held media outlets.

The defence ministry said heads of companies should draw up lists of their employees who meet the criteria and can be excluded from the draft.

Many Russian companies appear to have been caught off guard by Putin’s mobilisation order, which followed weeks of speculation about how Russia would respond to a conflict now entering its seventh month in which Kyiv and the West say Russia has suffered tens of thousands of casualties.

“We’re looking into it for now. We’re trying to understand how this will work,” a source at one large non-state company told Reuters on Friday shortly after the defence ministry issued its statement.

Russia’s central bank welcomed the move to exclude some financial professionals from being called up and said some of its staff met the relevant criteria.

“Employees who are engaged in critical areas will remain in their positions so the financial system can continue to work smoothly, people can receive their salaries, pensions and social benefits on time, card payments and transfers work and new loans can be issued,” the central bank said in a statement.
Chima Ugo is a patriotic Nigerian, a journalist, blogger and singer who is so much interested in the internet, journalism, and blogging and have been for half a decade.