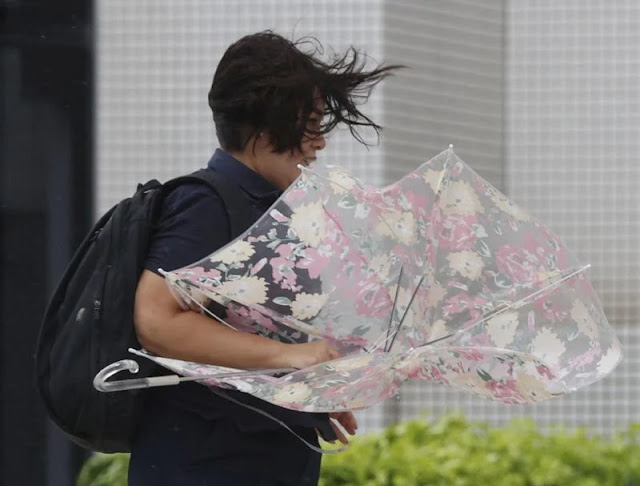 On Monday, as Typhoon Hinnamnor approached, South Korea upped its typhoon alert to the highest level, forcing the cancellation of flights, the suspension of some corporate operations, and the closing of schools.
Heavy rain and severe wind hammered the south of the country as the typhoon arrived from the south at a pace of 33 km per hour (20.5 mph) (20.5 mph). After passing the tourist island of Jeju on Monday, Hinnamnor is predicted to make landfall early on Tuesday in an area southwest of the port city of Busan.
A day after directing officials to use their best efforts to limit the typhoon's damage, President Yoon Suk-yeol declared that he would be on emergency standby.
“Very strong winds and heavy rains are expected across the country through to Tuesday due to the typhoon, with very high waves expected in the coastal region along with storm and tsunami,” the Korea Meteorological Administration (KMA) said.

According to it, Hinnamnor is travelling northeast in the direction of Sapporo, Japan.
Typhoons in South Korea are divided into four groups: normal, strong, extremely powerful, and super strong. Wind speeds from "very powerful" typhoons like Hinnamnor can reach 53 metres per second.
For the first time in five years, the Central Disaster and Safety Countermeasures Headquarters has raised the typhoon alert level to the highest in its four-tier system, with warnings being issued in the southern cities of Gwangju, Busan, Daegu, and Ulsan as well as on Jeju.
Rain fell all weekend in Busan city and the surrounding areas, and more is expected across the nation on Monday and Tuesday.
Although more than 100 individuals were evacuated and some institutions suffered severe damage, there have been no confirmed injuries.
Shipbuilders Daewoo Shipbuilding & Marine Engineering (DSME), Samsung Heavy Industries, and Hyundai Heavy Industries announced that they would cease operations early on Tuesday.
The production of large OLED TVs at LG Electronics' Gumi facilities will stop on Tuesday, according to a company spokesperson. Meanwhile, the steelmaker POSCO will stop operating all of its furnaces and other production facilities on Tuesday, according to the Yonhap news agency.
Owner of South Korea's leading refiner, SK Energy, SK Innovation, claimed to have asked carrier ships to suspend operations until the storm passes.
According to their websites, Korean Air Lines and Asiana Airlines have cancelled the majority of their Monday flights to Jeju Island, while low-cost airlines like Air Seoul and Jin Air have also cancelled some flights.
Chima Ugo is a patriotic Nigerian, a journalist, blogger and singer who is so much interested in the internet, journalism, and blogging and have been for half a decade.