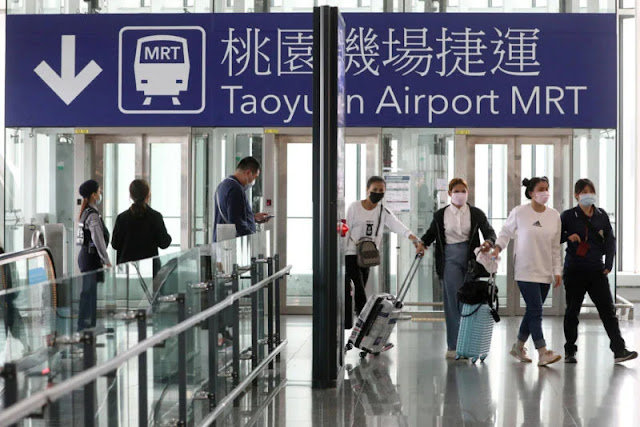 The government of Taiwan announced on Monday that it will restart visa-free entrance for travellers from nations including the United States and Canada starting the following week as it continues to loosen restrictions put in place to stop the spread of COVID-19.
Although it reduced the number of days spent in isolation for new immigrants from seven to three in June, Taiwan had maintained its entrance and quarantine requirements while significant portions of the rest of Asia had modified or eliminated them.
Due to the more contagious Omicron variety, Taiwan has reported more than 5.3 million domestic cases since the year's beginning. However, the government has loosened rather than tightened limits in what it refers to as the "new Taiwan model" because more than 99% of those had no or minor symptoms.
The Central Epidemic Command Center in Taiwan announced that beginning on Monday, visitors from the United States, Canada, New Zealand, Australia, Europe, and diplomatic partners will once again be able to enter the country without a visa.
The choice was made in light of the fact that the majority of nations have already reinstated pre-pandemic border controls and opened their borders, as well as the necessity to strike a balance between epidemic protection, social and economic activities, and international trade.
The present cap on 50,000 arrivals each week, the three-day quarantine requirement, and the requirement for a PCR test upon arrival, according to Command Center Chief Victor Wang, will all stay in place for the time being.
The requirement for pre-departure negative PCR tests has already been eliminated in Taiwan, where the population is highly immunised.
Taiwanese nationals and foreign residents have had to quarantine at home or in hotels during the pandemic, although this has never prevented them from leaving and then returning.
Prior to the epidemic, Taiwan was a well-liked tourist destination for primarily Asian travellers, with the most significant markets being in Southeast Asia, South Korea, and Japan.
Chima Ugo is a patriotic Nigerian, a journalist, blogger and singer who is so much interested in the internet, journalism, and blogging and have been for half a decade.