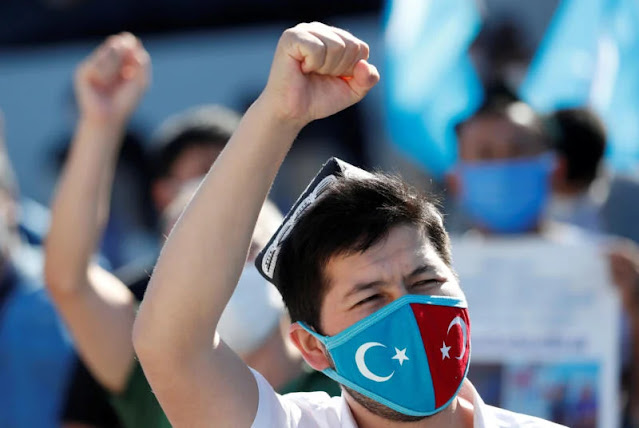 After the UN reported that China may have committed crimes against humanity in the far-western region of Xinjiang, members of the Uighur diaspora are pleading with the international community to take action.
Minutes before the end of her four-year term, Michelle Bachelet, the departing UN Human Rights Commissioner, released her long-awaited report.
The 48-page report stated that, at least between 2017 and 2019, it was "reasonable to conclude" that Chinese authorities had subjected Uighurs and other mainly Muslim minorities in Xinjiang to "large-scale arbitrary detention" in places they referred to as vocational education training centres (VETCs).
It also said allegations of torture, ill-treatment and sexual abuse at VETCs were “credible”, and said there were “serious indications” of forced labour and violations of reproductive rights in Xinjiang.

Uighur rights campaigners described the report as “a game-changer”.

In a statement signed by more than 60 groups, campaigners said the report by the world’s leading human rights body offered a confirmation of the abuses that human rights groups have documented in Xinjiang for years now.

The Uighurs are a predominantly Muslim Turkic group who differ in religion, language and culture from China’s majority Han ethnic group.

Uighur rights groups have accused China of carrying out a “genocide” against the community, by launching a campaign of mass internment, killings, forcible sterilisations, separating children from their families and destroying the group’s identity, including by demolishing mosques and other sacred sites.


The United States, Canada, France, the Netherlands and the United Kingdom have backed those claims.

China, however, denies the accusations.

In its response to Bachelet, Beijing claimed the report was based on “disinformation and lies fabricated by anti-China forces and out of presumption of guilt”.

China had previously described the Xinjiang camps as vocational training centres aimed at countering extremism and separatism in Xinjiang and had lobbied Bachelet to refrain from publishing the report.

The commissioner said last week that she had received a letter from China and several other countries, including North Korea, Venezuela and Cuba, asking that the report not be published.

Rushan Abbas, executive director of the US-based Campaign for Uyghurs, said Bachelet’s office had waited far too long to deliver the report.

Still, Abbas said, the report once again offers evidence of “China’s atrocities” and gave no room for the world to shy away from an obligation to act.

“Now that the leading UN office on human rights has spoken, there are no more excuses for failure to hold the Chinese government accountable,” she said.

Alim Osman, president of the Uyghur Association of Victoria in Australia, described Bachelet’s report as a “vindication”.

“The High Commissioner’s damning findings explain why the Chinese government fought at any cost with their allies to prevent the publication of her Uyghur human rights report, which clarifies China’s sweeping rights atrocities,” he said.

“The United Nations Human Rights Council should use the report to initiate a comprehensive investigation into the Chinese government’s crimes against humanity targeting the Uyghurs and others – and hold those responsible to account.”