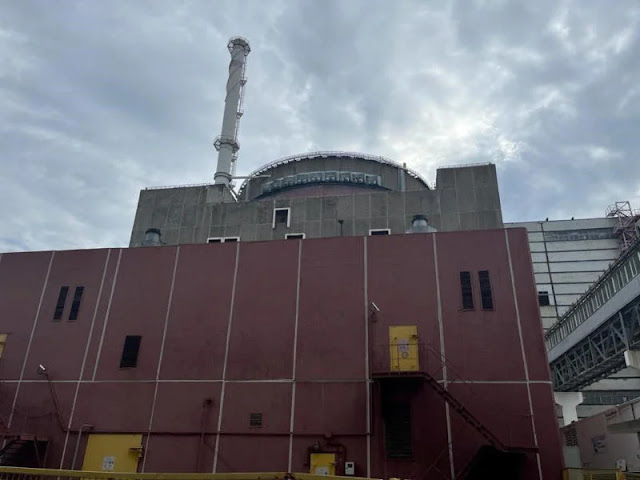 The Zaporizhzhia nuclear power station in southern Ukraine was allegedly struck by a Russian missile, according to Ukrainian nuclear operator Energoatom.
According to Energoatom, the strike damaged a power line at the plant, stopping multiple transformers for the number six reactor and necessitating the brief use of emergency generators.
“Russian terrorists shelled the Zaporizhzhia nuclear power plant again” during the night, Energoatom said on Telegram.

But radiation remained “at the normal background values level” said the plant on Telegram.

“Emissions and discharges of radioactive substances into the environment do not exceed the established permissible values,” it said.

Even “the presence of IAEA inspectors does not stop” the Russians, it said.

Europe’s largest atomic facility, located in Russian-held territory in Ukraine, has become a hot spot for concerns after tit-for-tat claims of attacks there.

The plant was seized by Russian troops in March and shelling around the facility has spurred calls from Kyiv and its Western allies to de-militarise areas around nuclear facilities in Ukraine.

Early in the war there was fighting around Chernobyl in the north, where an explosion in 1986 left swathes of the surrounding territory contaminated.

French President Emmanuel Macron this month urged his Russian counterpart Vladimir Putin to withdraw heavy weapons from the Zaporizhzhia region, while the Russian leader cautioned against the potential “catastrophic” consequences of fighting there.

A monitoring team of the IAEA deployed there in early September.

Russia was accused Monday of bombing a third nuclear plant site, the Pivdennoukrainsk plant in the southern Mykolaiv region.

Moscow is stepping up “nuclear blackmail”, said the plant’s director after the strike caused a large crater seen by AFP journalists hundreds of metres from the plant.
Chima Ugo is a patriotic Nigerian, a journalist, blogger and singer who is so much interested in the internet, journalism, and blogging and have been for half a decade.