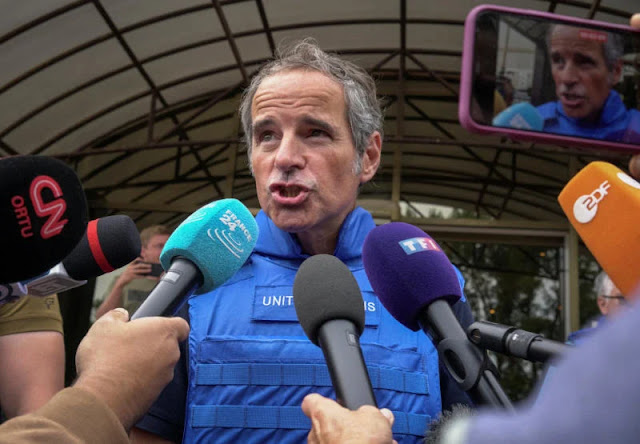 The chief of staff for the Ukrainian president accused Russia of trying to "destroy" the IAEA's inspection of the Russian-controlled Zaporizhzhia nuclear reactor, claiming that Russia shelled the plant once more on Thursday.

“The Russians have shelled (the town of) Enerhodar and the territory of the Zaporizhzhia nuclear plant,” Yermak wrote on Telegram, accusing Russia of acting like a “terrorist state”.

The Zaporizhzhia facility, which is close to Enerhodar, was taken over by Russian soldiers in March but is still operational and is administered by Energoatom, the national nuclear power plant of Ukraine.
The vicinity of the factory has been shelled numerous times over the past month, with Kyiv and Moscow exchanging the blame.
“It is Russia that is responsible for everything happening at the Zaporizhzhia nuclear plant and in Enerhodar,” Yermak wrote on Thursday, adding: “They want to wreck the IAEA mission’s visit.”

Minutes later, presidential aide Mykhailo Podolyak wrote on Twitter that Russia was conducting “demonstrative strikes” in Enerhodar in order to blame Ukraine for them.

“Russia conducts demonstrative strikes on Enerhodar, along the IAEA mission’s official route, in order to blame Ukraine for this,” Podolyak wrote, adding that this was a “demonstration of (Russia’s) real ‘interest’ in the inspection”.

The mission by the United Nations’ nuclear watchdog aims to assess risks from the ongoing hostilities in the area.

Russia’s defence ministry and a local Moscow-backed local official accused Ukraine of an attempt to seize the Zaporizhzhia plant after it said up to 60 Ukrainian soldiers crossed the front-line Dnipro river in boats early on Thursday.

The ministry said that “measures had been taken” to destroy the Ukrainian troops, including use of military aviation.
Chima Ugo is a patriotic Nigerian, a journalist, blogger and singer who is so much interested in the internet, journalism, and blogging and have been for half a decade.