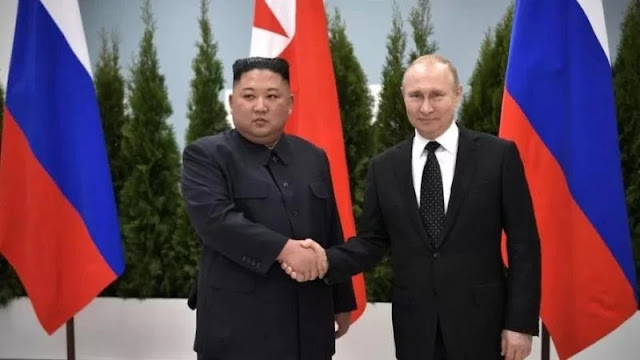 According to the US, sanctions have made it difficult for Moscow to supply Moscow's military, forcing Moscow to purchase military gear from North Korea.
According to a US official, Pyongyang is selling millions of rockets and artillery shells to Moscow for use in Ukraine.
They further claimed that as the battle continued on, Russia might be compelled to purchase more North Korean weapons.
They noted that purchasing from North Korea is a symptom of "serious supply problems."
The New York Times broke the news of the intelligence first. In a humorous response to the research, the Ukrainian defence ministry tweeted that it demonstrated how "Soviet weapons" had "exhausted their potential."
The ministry said the while Ukraine was switching to Nato standards, Russia was heading in the direction of North Korean standards – be it in the field of “weapons, politics or standard of living”.

Kim Jong-un’s regime has blamed the US for the conflict and accused the West of pursuing a “hegemonic policy” that justified Russia’s use of force.

Last month, North Korea recognised the independence of Russia’s two proxy statelets in eastern Ukraine – the Donetsk and Luhansk People’s Republics – and vowed to deepen its “comradely friendship” with Moscow.

Russia’s Vladimir Putin said the two countries would expand their “comprehensive and constructive bilateral relations”, according to Pyongyang state media.

Broad economic sanctions have done little to damage Russia’s income from energy exports, according to Finnish think tank the Centre for Research on Energy and Clean Air.

It estimates Russia has made €158bn (£136bn) from surging fossil fuel prices during the six-month invasion, with EU imports accounting for more than half of that.

But the US thinks export controls and sanctions are affecting the Russian military.

Last week, officials in the Biden administration told US media that the first shipments of Iranian-made drones had also been delivered to Russia.

US intelligence officers believe that Russian operators have travelled to Iran to receive training on the Mohajer-6 and Shahed series weapons.

But they told reporters recently that many of the drones had been beset by mechanical and technical problems since delivery.

Iran has officially denied delivering weapons to either side of the conflict, but in July US National Security Advisor Jake Sullivan said Tehran was planning to supply Moscow with potentially hundreds of drones for its war in Ukraine, some with combat capabilities.

On Tuesday, UK defence officials said in a daily update that Russia was struggling to maintain its supply of battlefield drones in the face of significant “combat losses”.