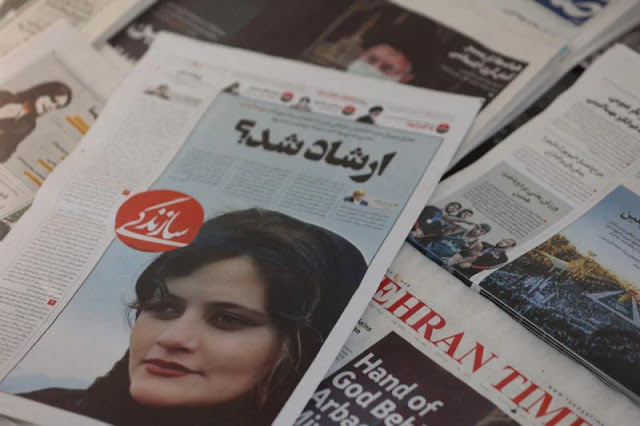 The "morality police" and key security personnel in Iran have been sanctioned by the US Treasury Police for their use of force against demonstrators and the murder of Masha Amini.
The 22-year-old who passed away last week while in detention was detained in Tehran on suspicion of donning "an inappropriate attire” and illegally donning her hijab headscarf.
The "morality police" and seven Iranian security agency executives were sanctioned by the Biden administration on Thursday, saying they are,
“Organizations that routinely employ violence to suppress peaceful protesters and members of Iranian civil society, political dissidents, women’s rights activists, and members of the Iranian Baha’i community.”

The Secretary of the Treasury, Janet L. Yellen said “Mahsa Amini was a courageous woman whose death in Morality Police custody was yet another act of brutality by the Iranian regime’s security forces against its own people,”

“We condemn this unconscionable act in the strongest terms and call on the Iranian government to end its violence against women and its ongoing violent crackdown on free expression and assembly.”

The secretary said that the decision to sanction the morality police and the senior security officials, “demonstrates the Biden – Harris Administration’s clear commitment to stand up for human rights, and the rights of women, in Iran and globally.”

Earlier in the week, the Iranian police denied beating Masha Amini and claimed that she died from a heart condition.

Tehran’s police chief, Hossein Rahimi, on Monday said she was detained for wearing tight trousers and wearing her headscarf improperly, but that claims she was mistreated were “completely false”.

The Islamic Revolutionary Guards Corps (IRGC) expressed sympathy for the family and relatives of Amini and called on the judiciary to prosecute any people circulating false news and rumours.

“We have requested the judiciary to identify those who spread false news and rumours on social media as well as on the street and who endanger the psychological safety of society and to deal with them decisively,” they said.
Chima Ugo is a patriotic Nigerian, a journalist, blogger and singer who is so much interested in the internet, journalism, and blogging and have been for half a decade.