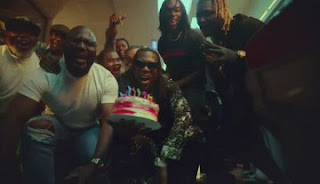 Burna Boy, a Nigerian artist, has released the video for 'Its Plenty,' the ninth track from his sixth studio album, Love, Damini.

The visuals were announced on Tuesday via The African Giant's Twitter handle.

Troy Roscoe, a film director from the United Kingdom, directed the video. By creating visuals for various contemporary cultures, he amassed over 200 million views.

It begins with scenes from a variety of festival stages he rocked this year, putting his star power in context with the massive crowds he draws wherever he goes.

Burna can be seen partying with his team members and handing out sweet treats from his "It's Plenty Ice Cream" truck to fans and supporters.

The 3:55 video, which shows different clips of Burna Boy at various concerts with his fans and also cameos Canadian rapper and singer Drake, has already received over 1.5 million views on the artiste's YouTube page.

Watch the video below: