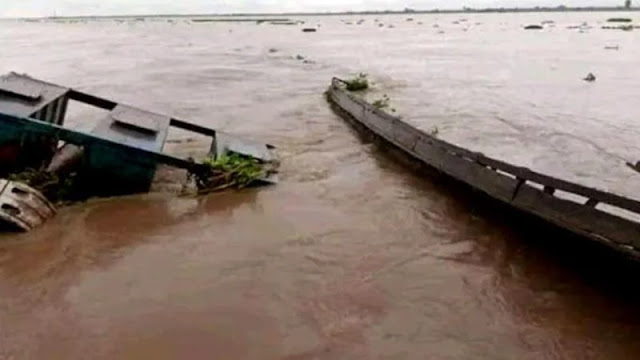 A boat mishap on the banks of the River Benue in Taraba State's Ibi Local Government Area (LGA) has resulted in the declaration of three people as missing.
The victims were a mother and two children, according to Bala Bako, the chairman of the Ibi LGA, who verified this on Tuesday during a phone interview with Channels Television shortly after the tragedy.
He described how the boat was travelling to Sarkin Kudu Market, which is situated on the other side of the river, while it was fully loaded with passengers.
“While taking off from the coast, the boat’s engine started malfunctioning and suddenly went off,” Bako recounted. “In the course of restarting the engine, the boat drifted down and hit a building at the riverbank, causing it to break into two parts.”
The incident, according to the local government boss, threw the passengers on the boat into confusion as they fought for survival.

“Several passengers jumped out; some had to swim to safety while others were rescued,” he added. Unfortunately, and sad enough, a woman and two children were not seen, they got drowned. Efforts are on already to rescue them if possible.”

In a bid to prevent a reoccurrence of the incident, Bako said the council would provide life jackets to safeguard the lives of passengers, as well as passenger manifest for proper documentation.
Chima Ugo is a patriotic Nigerian, a journalist, blogger and singer who is so much interested in the internet, journalism, and blogging and have been for half a decade.