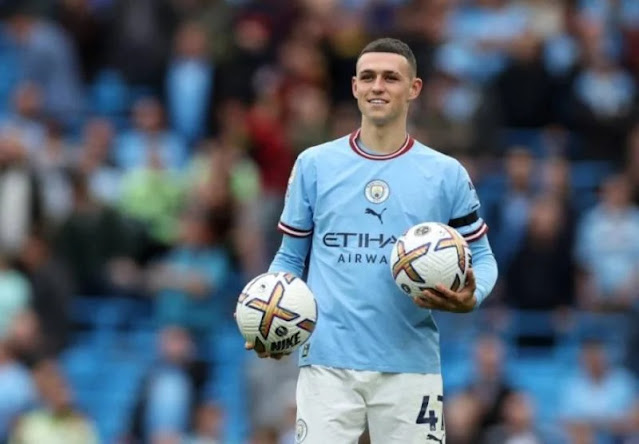 Once the Manchester City player is given the opportunity to assume a leadership role later in his career, Kevin De Bruyne believes Phil Foden will achieve new heights.
In Sunday's 6-3 victory over Manchester United in the Premier League, Foden struck a hat-trick for City.
The attacker from England not only scored goals at the Etihad Stadium, but he also put on a fantastic all-around performance that confirmed his position as one of City's important players.
City's firepower appears to be even more potent than it was the previous year, especially with Erling Haaland continuing his scorching form by scoring a hat trick in the Manchester derby.
Foden, who presently plays on the flanks for Pep Guardiola's team, is still developing, according to City midfielder De Bruyne.
The Belgian believes the 22-year-old will flourish as he matures and becomes the focal point of City’s creativity – a role currently held by De Bruyne.

“He’s so good, so it’s trying to find consistency. He’s been playing unbelievably for us so he will be here for a long time.”

De Bruyne feels Foden is talented enough to play in a number of positions and expects him to play more centrally as his career progresses.

“What is he not good at? He can play in a lot of different positions,” he said.

“I think eventually he will end up playing centrally but in this moment in time it is maybe a little bit better for him on the wing to have more freedom and fewer instructions so he flows into the game.

“I eventually see him playing more centrally when he gets older and gets more stamina. It’s all about little details to just find more consistency in the performances.”
Chima Ugo is a patriotic Nigerian, journalist and blogger who is so much interested in the internet, journalism, and blogging.